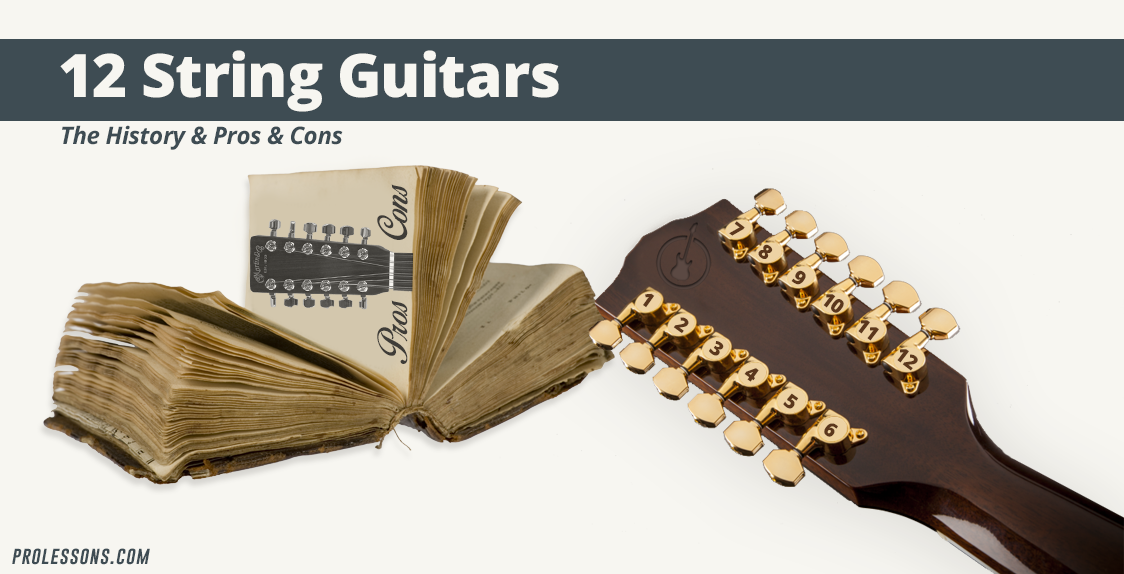 Like in many hobbies (or careers), guitarists are always asking themselves what new gadget or instrument they need to pick up. “Would my playing be better if I had (blank)?” or “Do I need to get one of the many 12-string guitars that better fits the music I want to play?” are examples of such questions.

These queries are magnified even more when it comes to guys who actually make music for a living. Whether it’s a country band looking to beef up their new single or a singer/songwriter who isn’t getting the sound she wants out of her guitar, there are always musicians looking to find the perfect sound.

One instrument that many guitar players toy with the idea of buying is the 12-string guitar. So what makes these so special?

Let’s dive into a little history of the 12-stringers and then we’ll explore the pros and cons of such an instrument.

First seen around the late-1800’s, the origin of 12-string guitars is a little murky at best. Several companies advertised them at the beginning of the 20th century, but speculation about the original designer points to Italy, Mexico, and a few places in between.

These instruments were mostly seen as a novelty for the first 30 or so years they were around. It wasn’t until blues musicians like Blind Willie McTell adopted the instrument that people really started to notice them. Another fun fact about the artist is that he was one of the first musicians to adopt slide guitar playing. Here’s one of the blues guitarist’s recordings, “You Was Born to Die.”

Fast forward to the 60’s and the 12-string guitar had another round of popularity with folk artists and names like Glen Campbell. As popular as the instrument was at the time, it quickly wore out its welcome as being a bit gimmicky.

Next to pick up the baton was a talented guitarist by the name of Leo Kottke. His playing, seen here in an old recording, kept the instrument alive for a little longer until other musicians came along to leave their own mark.

In the modern era of music, the 12-string guitar has been played by a number of musicians like Melissa Etheridge, Richie Sambora of Bon Jovi, Tom Petty, and The Edge. Whether it’s their guitar of choice or just something used on a track or two, guitarists often come back to this instrument when they need something with a special sound.

The 12-string guitar doesn’t show any signs of slowing down. It’s popularity has come and gone over the last 100+ years, so you don’t have to worry about yours going out of style. In fact, Taylor Guitars just launched a brand new line of them in 2016.

What Kind of Music Do You Want to Play?

If you’re thinking about buying a 12-string guitar, you first need to think about what kind of music you want to play and what kind of sound you’re looking for.

Over the course of its existence, this guitar has mainly been used for folk, blues, and other genres looking for a bit of authenticity. It does see some rock and roll from time to time, like in the famous Bon Jovi song, “Wanted Dead or Alive.”

Depending on the sound you’re chasing, getting a 12-string may be the perfect fix or it could just be kicking the can down the road. Conventional wisdom says that you should only get a guitar with 12 strings to compliment a six-string that you already own. Being a bit of a specialty piece, you may want something more conventional for everyday use.

Let’s dive into a few more of those pros and cons.

Pros of a 12-String Guitar

The biggest, and most obvious, positive to having a 12-string guitar is that they have a rich, beautiful sound that you will never get from a traditional guitar.

With 12 strings, you get a fuller effect that can transform a song from just about any genre into something special. As previously mentioned these instruments have been used for far more than just folk or classical music. You can use them for the blues, country, jazz and a variety of other situations.

If you are a working musician, either as a full-timer or just something to do on the weekends, owning one of these can give you an extra feather in your cap for individual songs from your setlist. The same can be true for anyone who plays at his church or at volunteer opportunities in the community.

When it comes to the upside of having a 12-string, it really breaks down to the wonderful sound. We could try to come up with some additional reasons to buy one, but the sound is what it’s all about.

If you want that special sound, there will be a little more work involved than with your traditional guitar.

For starters, you'll spend more time tuning your 12-string guitars because the workload just doubled. If you’re considering buying a 12-string guitar, there’s a good chance that tuning a guitar is no issue for you, but it’s something to keep in mind nonetheless. Some musicians prefer to tune these guitars down a step or so in order to get a certain sound. A capo might also get the job done for a similar effect.

With 12 string guitars, you’ll also need to get accustomed to physical differences in the body. The action (distance between strings and fretboard) is a little more intense with these instruments so that means you’re going to need to push down a little harder to get the usual chords. Another option might be to check with your local guitar shop to see if they can adjust the action for you.

Since you’re dealing with twice the amount of strings, changing them out from time to time can also be a bit of a chore.

Lastly, 12-string guitars can be a little rough for the players out there that love to fingerpick. If you really want to play that way, we’re sure you can make it work. It’s just something you’ll have to get around.

An overview of these guitars shows that they are beautiful in sound and design, but they do come with a little more work attached to them. It’s up to you to decide if a 12-string guitar is something you need to add to your musical arsenal.

Whether you are a beginner guitar player or someone who’s a little more advanced, it never hurts to look at what other kinds of guitars are out there. Once you’ve picked out a guitar to play, you might want to think about signing up for guitar lessons, even if it’s just to shake a little rust off.

For that, the professional musicians at Pro Lessons can be a great resource for you. We have guys who are actually out on the road touring with big acts and they’ve come here to teach you how to be a better guitar player. If you’d like to learn more about our affordable guitar lessons, click on the banner below.