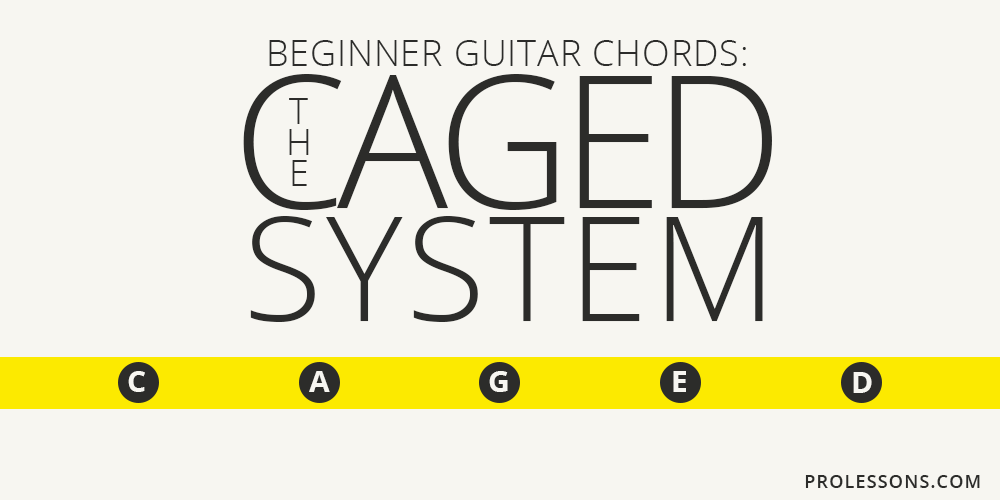 There's a great way to learn all of the chords on your guitar. It's called the CAGED system. CAGED is an acronym, as it refers to these five chords: C A G E D. The CAGED system focuses on these beginner guitar chords and then, once you've mastered them, how to move those shapes around the fretboard as bar chords. Don't worry, we won't jump into bar chords just yet. First, let's lay the foundation by learning the five basic chords in the CAGED system.

We're going to spell everything out for you as if this is your first time playing these chords. Some of the chords here will be relatively easy, and others will be a real challenge for beginners. Persevere. These chords are the building blocks for thousands of popular songs.

On the flip side of the coin, you may already know most of these chords. It's always a great idea to go back and revisit the fundamentals. As you play through, definitely check out the Pro Tips and get the most out of your practice time.

Once you're able to play all of the chords in the CAGED system, go check out this video where guitar phenomenon Court Clement shows you how to use the CAGED system to take your rhythm guitar chops to the next level.

Court is one of the premier rhythm guitarists in the world. With credits like Jonny Lang and Marc Broussard, we honestly can't think of a better qualified person to show you how to make rhythm guitar sound and feel good.

In teaching Beginner Guitar Chords, the C Chord is a great place to start. It's a chord that every guitarist needs to know. Thankfully, it's a pretty easy grab. Here's the shape: 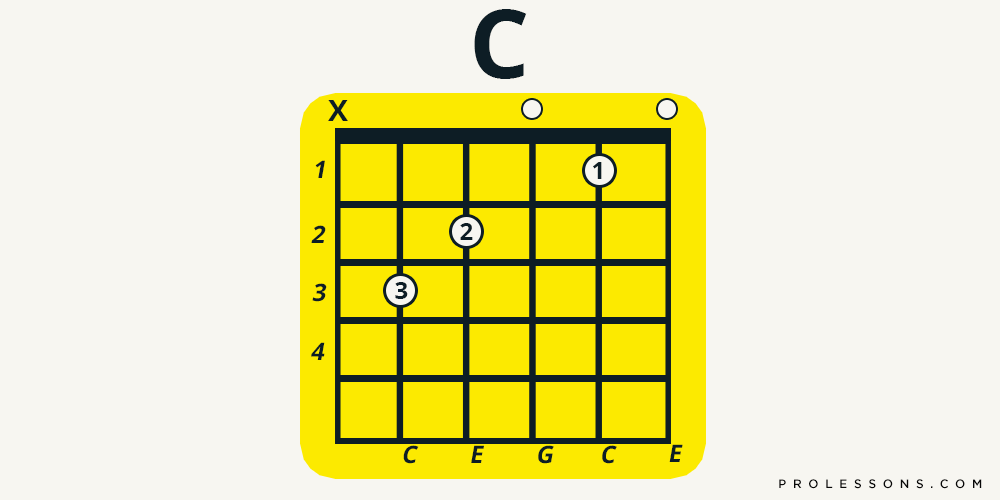 The first time you put your fingers on the fretboard to play a new chord, you should expect it to sound pretty janky. With each repetition, it will ring out with more clarity until you've done it enough times that you don't even have to tell your fingers what to do- ahhhh, the beauty of muscle memory.

Pro Tip: What you don't play is just as important as what you do play. In the case of C, make sure that you're not strumming the low E string. When you play a D you skip the E and A string.

This chord is probably the most challenging of the five. The second third and fourth fingers are all bunched up in an awkward way. You may find it easier to use your first, second, and third fingers. Don't do that. It will make it super hard to switch to the E major later on. 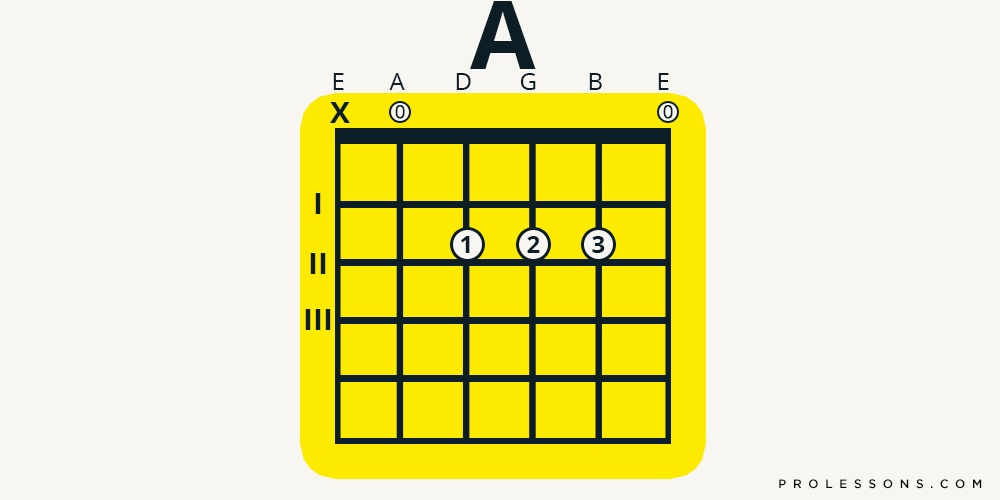 A lot of people use the A as a bar chord. Definitely give that a try. It presents its own set of challenges, but once you overcome those obstacles, it's a quick and effective way to play this chord.  The open high E is the number one challenge when playing the A chord as a bar chord.

In the original chord diagram, you have an open high E string. It's incredibly tough to get that note to ring out when barring, as you have to arch your first finger at the first joint and have it seated perfectly on the strings to make it happen. Instead of that, most guitar players arch their finger just enough to mute the high E. It's totally cool, because you still have the the notes you need to make a proper A chord (A-C#-E) Just don't bar all the way to the high E or you'll get an F#, and that's not in an A chord...so arch it! Arch it good!

Pro Tip: This is an A major chord. There's another popular beginner guitar chord called 'A minor'. Always remember that a major chord is just the letter by itself, but a minor chord has a lower case m beside the chord. It's written as Am.

Ah, yes. Back to a fun, easy, beginner guitar chord. This is the first chord most guitarists learn, and it also seems to be the first chord most hit songwriters use when inspiration strikes. There are two very popular (and very similar) shapes, but we're going to go with this one today. 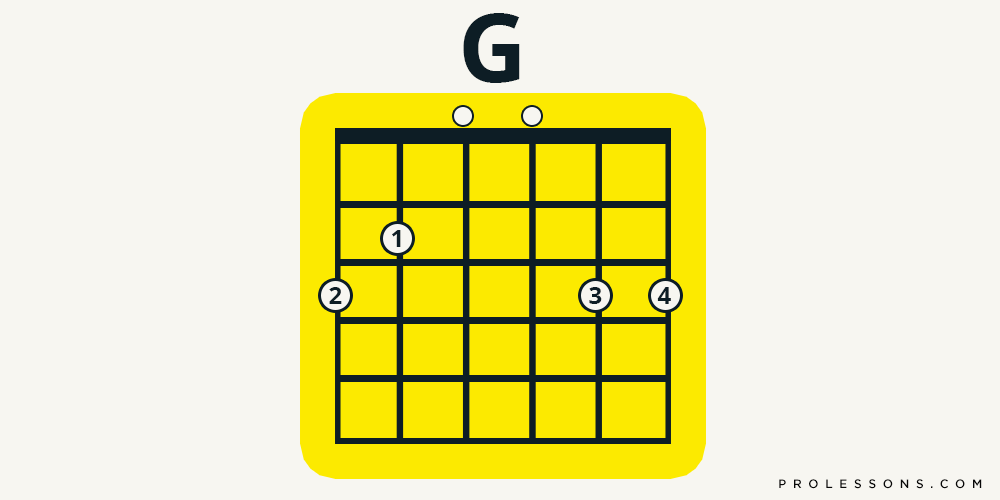 It might have been a stretch to refer to G as "fun and easy". Especially if it's your first time playing this king of all beginner chords. You do have to use all four of your fingers, after all. So many fingers, so many chances for things to go wrong...which leads us to our next Pro Tip.

Pro Tip: Arpeggiate. That simply means play each note in the chord one string at a time instead of strumming them all together. When you arpeggiate the chords, you can hear exactly which notes are giving you trouble and which ones are ringing out as they should. 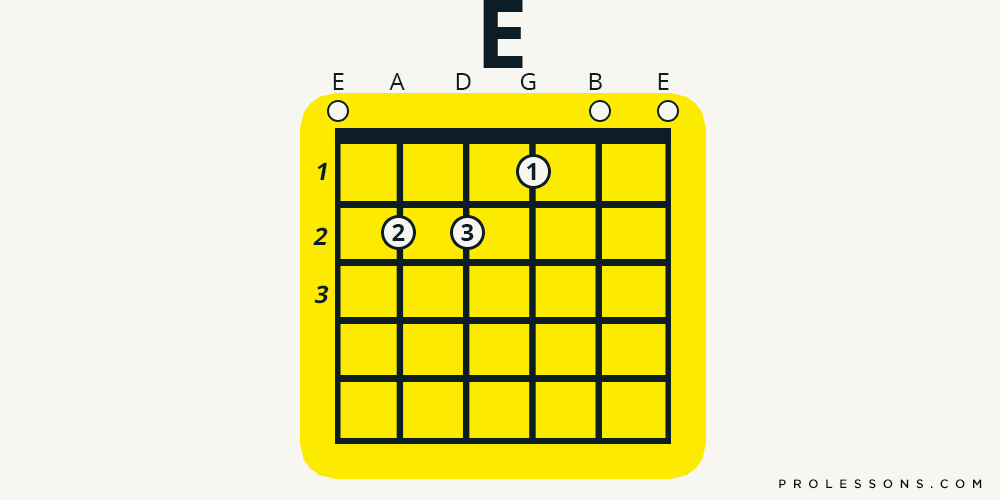 As you arpeggiate this one, you may find one note getting muted. It's the first finger on the G string. That's an important note, so we're going to need to find a way to get it to ring out bold and true. It's usually the third finger being lazy and laying across the G string. So arch it up, scoot it up, whatever you have to do to get it play the D string and not impede the G# that you're first finger is playing...that's the note that makes the E major an E major, after all.

Now that you're getting all of these beginner guitar chords together, you should try switching between chords. Alternating between any two is a great exercise, but at this point, just play around with getting all of them fluid. Every time you grab one of these easy beginner chords, you're shaving a few nanoseconds off of the time it takes to form them.

Pro Tip: Don't hold each chord for too long or press overly hard. As you train the micro muscles in your fingers, you'll get better results if you simply place your fingers on the chord. Strum, arpeggiate, let it go, and then try again.

It's time for our final chord in the CAGED system. The ever popular D major chord. This is another relatively easy grab, but take note that you're only going to want to strum the top four strings. 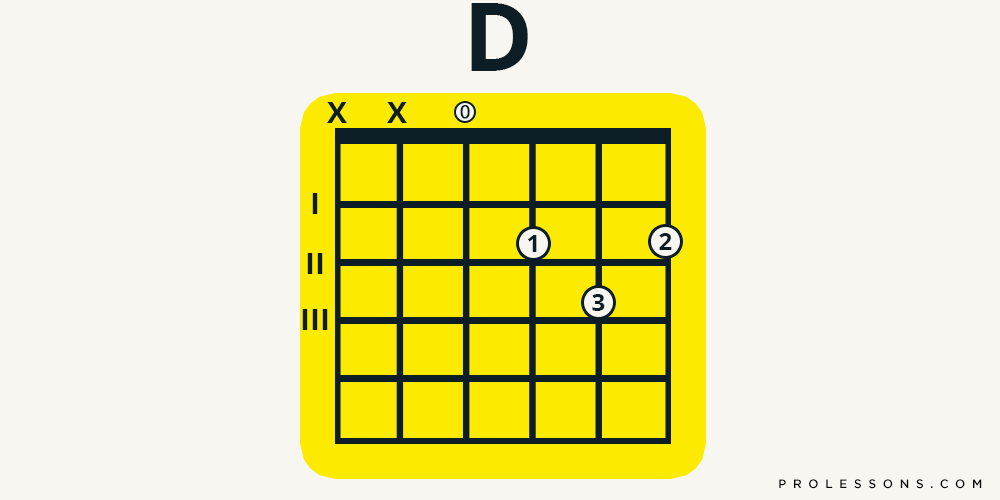 Now that you know all of the chords, you're ready to dive into the CAGED system. Well, nearly ready. Get really fluid with these chords and you'll adapt much quicker to the more challenging bar chord versions that you'll soon learn.

Nicely done! You're all prepped and ready to tackle that video with Court. We mentioned that these easy beginner guitar chords, while not in the same key, could still be used to great effect. Well, we're going to leave you with the perfect song that uses all five chords, by a man who knew the rules like a pro, but broke them like an artist. Jimi Hendrix's "Hey Joe" is a true guitar classic, and just so happens to use the chords in the CAGED system to paint one of his masterpieces. It's pretty easy actually, just play C G D A E...but play it with feeling.