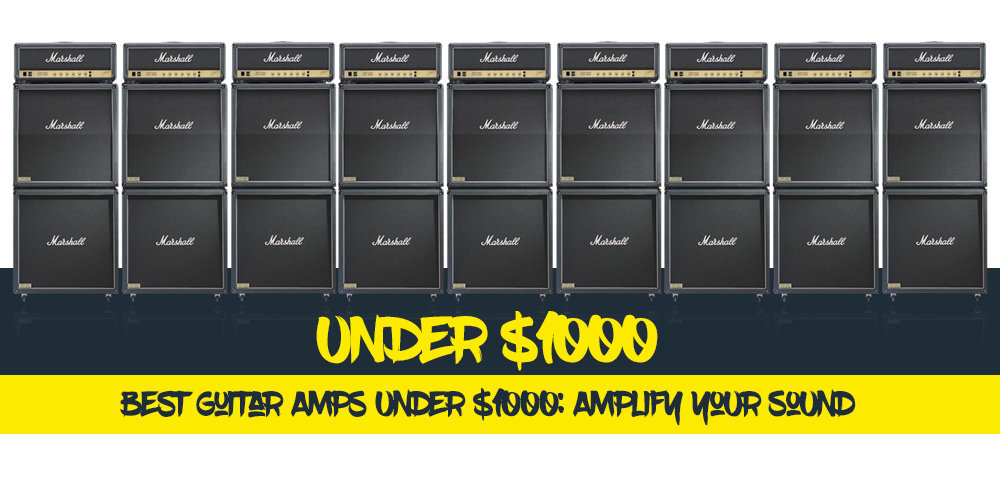 The world of guitar amps is very diverse, but in some ways it’s also like a small group of planets in a solar system. There’s the custom built hand wired amps that cost a mint and then there’s the foreign made amps that sound great but won’t hold up on the road. Too often these imports are put in bus cargo bays and bounce from city to city. Even in a good road case, the solder joints just can’t hack it. You get to the gig and the amplifier craps out and your $500 tube amp is in for repair. You’ll likely drop $125-$200 to get it repaired. Do that a couple of times and you can buy a new one. The hand wired ones cost up to five times more and hold up better, but still require TLC. Let’s look as some of the best guitar amps under $1000 that will serve you well.

Even the Peavey stuff is all pretty much made overseas now. Cheap labor is bringing the cost of manufacturing down but that means you have to deal with the woes of repair and headaches of breaking down on the gig. Don’t worry, though, because they still have some of the best guitar amps as well.

The American made Classic 30 and Classic 50 amps are still around in music shops. Just look for them. They are built well and sound incredible. If you can’t find them in a music store around you, try the internet. These amps may cost a little more on eBay, but they are worth looking for.

The Delta Blues 2x10 and 1x15 are equally as rich in tone. All of these amps may retail at the $1000 mark or just under, but most stores will sell you one at $750 or less. The Classic 50 4x10 is as punchy and clean as it gets. It’s a killer amp that could really help your sound. The Delta Blues 2x10 amp is to die for. Tone that is round and in your face. The amp distortion is amazing and your pedals will love this amp.

As consumers all know, prices vary from store to store. Some mom and pop shops won’t budge from typical retail prices. If you’re lucky, they might give you a 10% discount if you do a lot of business.

The glassy tone of a Fender amp is what so many guitarists reach for. If that’s your sound, you’ll love the Fender Hot Rod Deluxe and Blues Deluxe guitar amps. At 40 watts, these little combos pack a mean punch. Some will say these amps break up too fast or that they don’t like the way the amps react to pedals. To each his own. Plug straight into one of these beauties and be prepared to smile. They retail somewhere between $800 and $1000 but most big stores have them at around $700. If blues or country is your thing, these are awesome combos. Also, you might want to look for slightly used ones in Guitar Center or other stores. You don’t want one that’s been abused, but a lightly used amp could save you a couple hundred dollars. Regardless of where you pick one up, these amps should be under $1000.

If you like Orange, here’s a small combo that’ll warm you up. What a classic tone and it comes complete with a little hum. Hook up your Strat to this amp and you’ll love the creamy crunch. This solid state amp with a nice verb cranks up and delivers.

This little 15-watt amp coming in at $799 is a very clean power tube guitar amp. It has a clean, overdrive, and master section but doesn’t break up too fast. This makes it perfect for pedals. Pedals love amps that stay clean longer, so you can enjoy the most from your pedals. It’s not that heavy and for the money delivers a warm rich tone with nice reverb.

Like we talked about earlier, be mindful of tossing one of these in the cargo bay of your bus. You’d be better off sleeping with it in the bunk on the bus. Just don’t bump these amps too hard or they might sound really bad if you get any sound at all at the gig. For another one of the best guitar amps under $1000 try the Blackstar HT Club 40 (only $699 at Sweetwater).

There’s nothing quite as classic as a Marshall guitar amp for rock. That tone is simply unmistakable. The Marshall DSL 40 C bears the family resemblance. This 40-watt all-tube 1X12 combo is a chip off the old block. “It’s sturdy and roadworthy” as they say.

The Celestion 12 inch speaker is big. It has a Triode (half power) option that drops the amp to just 20 watts making it very versatile. At 50 pounds, this all tube guitar amp will make you very happy as it has a host of options on the front panel. With the best guitar amps, you will certainly stand a good chance of finding the tone you’re looking for.

While we're on the British tone wagon, take a look at this Vox 15-watt 1X12 tube guitar amp. It offers two channels of sweet vintage tone for around $600. This beauty offers tremolo and reverb. It has a G12M Greenback Celestion speaker and the tone is quite nice.

Of course, even amps from the same family aren’t always that similar. This little Vox AC15 C1 is an amp to remember. Small enough to toss in the back seat and head off to the gig, you’ll enjoy playing this amp if you like vintage tone.

There’s dozens of other options in the $1000 price range and, if you look around, you can find more expensive amps that are used under $1000 too. When it comes to small amps, you will need to play several to find the one you really love. Your style and the pedals you use will determine the outcome of your search. Pawn shops and mom and pop shops are full of killer deals when you can find one. The Peavey 6505, the Line 6 DT25, and the Fender Super Sonic 22 are also possibilities. You can even check out a few other options that we wrote about in an earlier piece. Go on a search and we hope you find what you’re looking for.

Having the right equipment is only part of the battle when you’re hoping to become a better guitar player. You’ll also need a teacher that knows what they’re doing. At Pro Lessons, we offer affordable guitar lessons online taught by experienced musicians. To find out how you can be our next student, click on the link below.