The Best Guitars: Top 5 Electrics You Want to Play 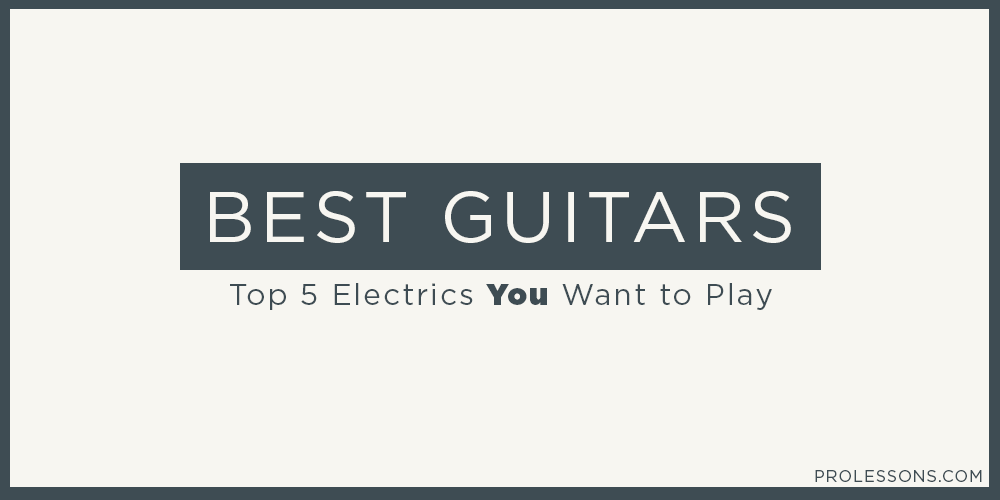 Get ready to have some fun! Here's a list of the best guitars since guitar.

These are the ones that shaped the sound of Rock n Roll! It may have been Charlie Christian who first taped a pickup to his archtop to get above those noisy drums. Or perhaps "Muddy Waters invented electricity.” Whoever invented it, Leo Fender and Les Paul definitely had their hand in perfecting it.

Without further ado, let's dive into the top 5 electric guitars and see if your favorite made the cut.

The 335 has been a preferred choice for rock stars and session musicians alike.  It burst onto the scene in 1958 and immediately played a role in crafting the early sounds of rock n roll.

Chuck Berry is the granddaddy of rock n roll, and his preferred axe, the 335, could easily be the granddaddy of electric guitar. However, it didn't stay where it started. In the hands of Dave Grohl and The Edge it continues to propel music forward in bold new ways.

This is the guitar of kings! Literally, BB King used his own "Lucille" model of this guitar to craft his lyrical, euphonic blues masterpieces. This semi hollow offering from Gibson is the stuff of legends. It's a big guitar with a big sound. Here are the details on this bonafide classic.

One of the first and most important solid body electric guitars. There had been a few variations of the electric solid body guitar floating around since the mid 1930's but the Fender Telecaster was the one that brought solid body guitars into the mainstream back in 1951. The sound, look, and cool name made it an instant hit with the guitarists of the day. It really took off with the country guitarists at that time, and still is a huge staple of country music.

However, we're thrilled to see the resurgence of this brilliant guitar in the hands of rock, pop, and soul guitarists alike. The sound is traditionally bold and bright. With the proliferation of boutique pedals, don't be surprised when you hear those warm, wooly tones coming out of that tele. It's just a great guitar that's capable of anything in the right hands. This is also a first call instrument for many ambient guitarists. The tele is one of the best guitars ever made. Hats off to you, Leo. You knocked this one out of the park!

Three of the best guitars are in a tie for number 3. Since there's probably no single guitar that belongs on this list with these four giants, we'll look at three that, in combination, might just stack up.

This relative newcomer has become synonymous with heavy tones. Although Paul Reed Smith blew up during the age of New Metal, don't hold that against them. They have grown and changed with the styles of the heavies over the past few decades. They've been tuned down to all sorts of unnatural pitches and yet, they remain. Tried and true, PRS ain't going nowhere.

If we're getting genre specific, you can NOT overlook this guitar. Its name is synonymous with shred. In the hands of Steve Vai, Ibanez became the stuff of legends almost overnight. Joe Satriani had a hand in making these guitars highly sought after as well. Who needs lyrics? When you have this much talent, the whole song can just be one epic guitar solo.

If we're measuring by notes alone, then you can bet there have been more notes played on an Ibanez in 1989, then all other guitars, from every genre put together. Shred on my hairy brothers. Shred on!

We're getting close! Two of the best guitars remain. This could go either way. Let's stir up a little controversy and go with the Gibson Les Paul at number two on our list of the top five electric guitars.

In response to the solid body electric guitar phenomenon, Gibson Guitars brought in a young man named Les Paul to help them conquer the world of rock n roll. Les Paul was not only a monster guitar player, he was a visionary who loved pushing boundaries. Together they hit a homerun with this beautiful sounding and playing axe!

Originally introduced in 1952 with P90 pickups, most guitar players feel that it was around 1957, when Gibson replaced the P90s with their famed PAF humbuckers that this guitar became legendary. Although, the new fangled humbucker equipped Les Pauls were not well received and even discontinued for a few years, it wasn't long before guitarists of the world realized that Gibson had a hit on their hands.

These Mahogany masterpieces, combined with the new high gain amps that were becoming readily available, ushered in a new era of rock n roll. Fronted by such heavy-hitting axe slingers as Jimmy Page and Joe Perry, the new sound of rock and roll was huge...and righteous!

You probably saw this one coming. I mean, come on; Jimi, Clapton, SRV, Wayne from Wayne's World. The Strat was Leo's second ginormous runaway success. This strange new 3 pickup solid body electric guitar with a whammy bar was immediately received with open arms by (almost) every guitarist on the scene. It has remained relatively unchanged since its inception in 1954. As music evolves around it, this hand crafted slice of everything that's noble and pure stands like a beacon of tone in a world gone awry.

Or maybe it is the Les Paul. If you hate our guts for getting the order wrong, please feel free to reverse it. They're all good!

Speaking of all good, all good things must come to an end. Since we've already done the big reveal, we'll leave you with this thought: Look at how many styles and genres of music have come from these 7 basic guitar designs.

Be inspired to craft your own sound with whatever guitar you find at arms reach. Jimi Hendrix didn't change guitar forever because of the Strat, in fact there's a weird little picture floating around of him playing a Les Paul. It's odd though, kind of like seeing a picture of an actual alien. We don't recommend googling it.

Seriously, though, take the time to perfect your craft and take all of the limits off of yourself. It's about time for a new sound, and the innovators of tomorrow are out there right now practicing and dreaming of the day when they get their chance to shape the sound of this generation.

No matter where you are on your musical journey or what kind of music you want to play, you’re going to want to polish up on your skills. That’s where Pro Lessons comes in handy. We’ve got online guitar lessons taught by the guys that are out there playing on the road right now.