Custom Built Guitars: Are They Worth It? 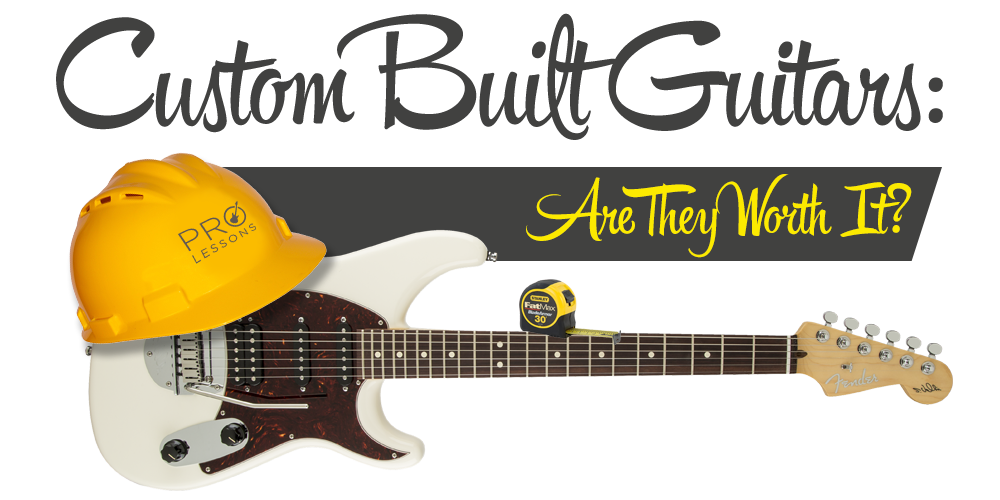 In the world of guitar, there are so many options and there are new innovations arriving daily. From automatic tuners on the headstock to digital tuning options on board, you can just about tune your guitar to any alternate tuning without touching the headstock. There are tons of new pickups, pots, paint jobs and finishes, and more. Still, the goal is the same. We’re all looking for that one guitar that we can’t put down. We love to look at it and we love to play it. Assembly line guitar manufacturers are plentiful and there are some good ones, but still some want that custom built guitar that is just exactly what they dreamt up. Question is, are the custom built guitars worth it?

Here’s the deal: Companies that mass produce guitars have a formula that works and allows them to produce large numbers of guitars to meet the demands of the public. Companies like Fender, Gibson, Ibanez, etc. put out an enormous shipment of guitars to stock the shelves of stores like Guitar Center and Sweetwater.

This is awesome as it makes guitars readily available to anyone. Almost all of these companies have a line of custom built guitars that cost double or triple the price of the assembly line models. Are they worth it? You decide, but first examine the evidence.

A guitar built for Fender in Mexico can sometimes be better than an American made one. You’ll see a professional playing a Mexican Strat or Tele just because it’s a “winner.” Truth is, you can pick up 20 American made Fender Stratocasters and Telecasters at Guitar Center and 1 out of 20 might be really great. There’s been much done to improve on this, but it’s still true. The same is true with Gibson or any of the other mass manufacturers. This is why many have turned to custom built guitars. Seems like they’re given more attention, or so we feel.

All of the large guitar manufacturers are building a line of what they call “custom built guitars.” Gibson, Fender, Ibanez, Dean etc. They all are doing it. But, a custom built guitar may cost $2000 or much more where an assembly line guitar that is similar may only cost $800 or so.

Sometimes it’s about the woods and other components, but it’s mostly attention to detail. Put a little more money into the electronics and cosmetics and they can sell it for three times the assembly line version. You feel like you got a killer guitar and a sweet deal. Maybe you did, but if a shoot out was done between these extremes by a professional guitarist, sometimes the cheaper overseas model would actually win out. In this case, it probably wouldn’t be worth it.

Companies like Taylor and McPherson have started small and built on their reputation as creators of custom built guitars. As they became more and more widely known, they have sought to build more guitars and still keep the same quality workmanship. Is it really possible?

For 95% of the guitar-buying population, the answer is probably yes. Most guitars are built mathematically as to hit the mark every time and most of these builders do exactly that. However, with wood there are always invariables. Woods move with the atmosphere. Dry or humid conditions change from season to season and from place to place on the globe.

Frets can pop out or bindings can come undone or finishes can even crack due to the conditions that the guitar is exposed to. For example, a guitar can leave Asia in the box and be in great overall condition, but by the time it reaches the shelf in the US, it may need a fret job. Most stores have a set up department that goes over each guitar before it leaves the store, but not always.

Other mail order companies like Sweetwater or even Guitar Center offer a 30-day return policy, but that can be a hassle, so watch out for overpaying for custom built guitars just because it has a big name on it. You want to play the guitar a lot before you decide to invest that kind of money.

There is some merit to trusting in the big names like Gibson, Taylor, McPherson, Martin, etc. They are awesome guitar builders but for a custom guitar to be worth it, you need an expert opinion or you must really know your stuff.

Most electric guitars are solid body, meaning they are a solid piece of wood. Even the hollow body guitars have a wood block under the top to stabilize the body these days. Acoustic guitars are much harder to build and require more detail and precision.

Electric guitars are equally about sustain and tone but it is achieved differently. Wood types, pocket necks or through necks, pickups and pots, etc. all play into the equation on electric guitars. Custom built electric guitars are much easier as you can almost order the parts and do it yourself if you wish. Companies like All Parts, Best Guitar Parts, and Warmoth invite you to custom build your own guitar start to finish and they offer convincing guarantees.

Carvin also offers a similar option. Custom build it just like you dreamt it up. They’ll even put it together for you. If you don’t have any guitar knowledge, we don't recommend you ordering parts and expecting the guitar you build to turn out perfect. That is, unless you are just experimenting and have plenty of money to educate yourself. Maybe your dream is to build guitars? In that case, go for it.

There’s something odd about paying big money to have someone do what a company should be doing for each and every customer in the first place. If it’s truly a custom built guitar where you get to pick the parts and options, that’s one thing. Just buying a “custom built” Les Paul, Strat, or Tele that already cost a lot of money and paying three times more just because they slapped “custom” on there is something else.

We love guitars, so if you’ve played all the standard guitars and you just can’t seem to settle on “the one,” consider looking at custom built guitars. A custom guitar can become a favorite and, of course, then it’s something unique to you too.

Is It worth it? If the custom guitar you build or buy is just perfect, then it’s definitely worth it! If, on the other hand, you’re just going to go spend $4,000 on a custom built guitar that you’re not sure even helps you, the answer is probably no. Respect your budget and don’t mistake fancier equipment for becoming a better guitar player. Good equipment only reaches its best potential if the player has put in the time elsewhere.

If you’ve got $1000 to spend, go play 20 guitars at Guitar Center and find the one. If you want to experiment and be unique, save $1500-$2000 and build yourself a dream guitar. If you got money to burn, order a custom built guitar and make a major investment. Everybody is different, so the answer isn’t as clean-cut as you may like for it to be.

Here’s the deal: You want a guitar that makes you wanna play. If you’re a collector, it’s a different matter, but most just wanna play and sound good. Go find that perfect guitar.

The people at Pro Lessons know that equipment is important, but it’s more important that you know how to play your instrument. That’s why guitar lessons are a must. Our professional instructors are experienced musicians that can teach you how to play at an affordable rate. Check us out by clicking on the link below.