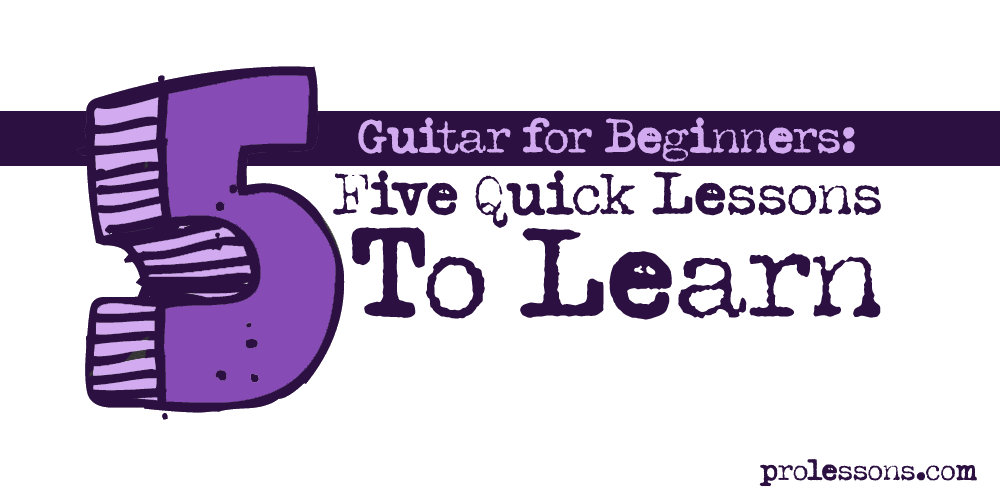 Guitar for Beginners is relative to the person's age. A beginner lesson for a teen or adult would be a little different than say a 6-year-old. Still, there are a few things that a beginner at any age should learn when it comes to guitar. First of all, it’s very important to have a guitar that performs suitably. You just can’t learn very well on a guitar that has issues. Strings that are hard to press down or strings that are rusty or missing altogether will be very discouraging to any guitar student, especially a beginner. Make sure you have a decent guitar that plays well and functions like a guitar should. Now if you’re ready, let’s talk about some quick lessons in guitar for beginners.

Lesson 1: How To Hold The Guitar

The first lesson to learn in Guitar for Beginners is how to hold a guitar. You should begin by sitting in a chair with a good straight back. Place the guitar on your right leg if you’re right-handed and line up the curve in the side of the guitar’s body to your thigh. Sit up straight and keep the guitar level. Don’t lay it down or lean it in to you. You want to be able to look down at the strings and the fretboard. Now drape your right arm over the top of the body and let it hang loosely from your elbow down toward the strings. Reach out with your left arm and put your hand around the neck so your fingers are on the strings and your thumb is touching the back of the neck. Keep your left wrist down and thumb in the center of the neck. Let your fingers do the fretting.

Lesson 2: How To Hold The Pick

There are different ways to play the strings. Some people use their fingers and others use picks. A flat pick is very typical of most guitarist. Put the teardrop looking plastic pick between your thumb and index finger in your right hand. Hold the wide part of the pick and let the small tip of the pick stick out a little. Try strumming down the strings a few times and you’ll get the concept. You want to hold the pick nice and tightly but don’t tighten your wrist or elbow. You want to keep your wrist and elbow very loose and free so you can strum without a lot of pressure. You don’t have to beat the strings really hard, just smoothly and evenly. Note that you won’t always play every string each time you strum. Some chords require only four or five strings, but other chords do require all six. If you’re picking a melody, for example, you’ll only play one string at a time.

Lesson 3: How To Play A Melody

To play a simple melody, you will want to place one finger at a time on the note you want to play on the fretboard. Let’s try it with “Yankee Doodle.” Put the index finger from your left hand on the second string (That’s from the little strings up). That second string is also called the B string. Put your index finger on the first fret, second string. In case you’ve gone this far without tuning the guitar, this would be a great time to take care of that. Once you’re in tune, you’ll be playing a C1. On the same second string, put your third, or ring, finger on the third fret note. That’s a D3. Finally, there are two open strings we will use. Little E, or the small string, and B (second string again) will be open. These are our 4 notes: C1, D3, E0, and B0. Let’s look at the first line and melody to “Yankee Doodle.”

Each syllable will get a note. Here’s a fret board below to help you identify the notes. Once you can identify each note, you can begin trying to hold it down and pick the note. You will pick only one string since this is a melody.

Lesson 4: How To Play Chords - Guitar for Beginners

Chords are notes put together to create harmony. On guitar, it’s as easy as holding down combinations of notes and strumming multiple strings. Even though it sounds easy, it can be a challenge because you must hold your left or chord hand just right so the finger doesn’t mute the strings you want to hear. Sometimes you actually mute on purpose in order to silence the strings you don’t want to hear. Let’s start with two very basic guitar chords and see how you do. The C Major chord uses three fingers. Finger 1 on the chord hand goes on the first fret of the second string. Again, always count from the little E string up. Finger 2 goes on the second fret  of the fourth string and Finger 3 goes on the third fret of the fifth string. Hold all three of these notes down with your fingertips keeping your thumb pressed against the back of the neck and strumming down from the fifth string. Don’t strike the Big E string (the one closest to your head) with the pick. This is a nice fat C Major chord. When you get it sounding clean, strum it for a while.

Exercise 1: Strum one strum for each slash and try to change chords without stopping your strumming.

Lesson 5: How To Strum A Simple Song

Guitar for Beginners wouldn't be complete if we couldn't get you to play at least one song. Most songs are pretty easy to learn, only using three or four chords. As you develop strength in your hands, you can more easily play new songs and become a really good guitar player. That’s when you know you can move beyond guitar for beginners. An easy song you can strum with just three chords is “Amazing Grace.”

To play “Amazing Grace” in 3/4 time, you need to strum in sets of three. It’s slow and steady and it may not sound great at first. You’ll have to practice changing between the D chord and the two chords we learned earlier. Eventually you’ll sound great, though.

Guitar for beginners doesn’t have to be all that hard. A novice may play for 15 minutes at a time until he or she can last longer. Your fingers and hands will have to grow into it. These are just a few quick lessons to help you get started. One thing that you will really help you out is enrolling in guitar lessons. More than just guitar for beginners, lessons can help a player of any skill level improve in his playing. At Pro Lessons, we offer online guitar lessons from a variety of experienced instructors at an affordable rate. Click below to find out how you can get started today.