Guitar Fretboard Notes: How to Understand Them 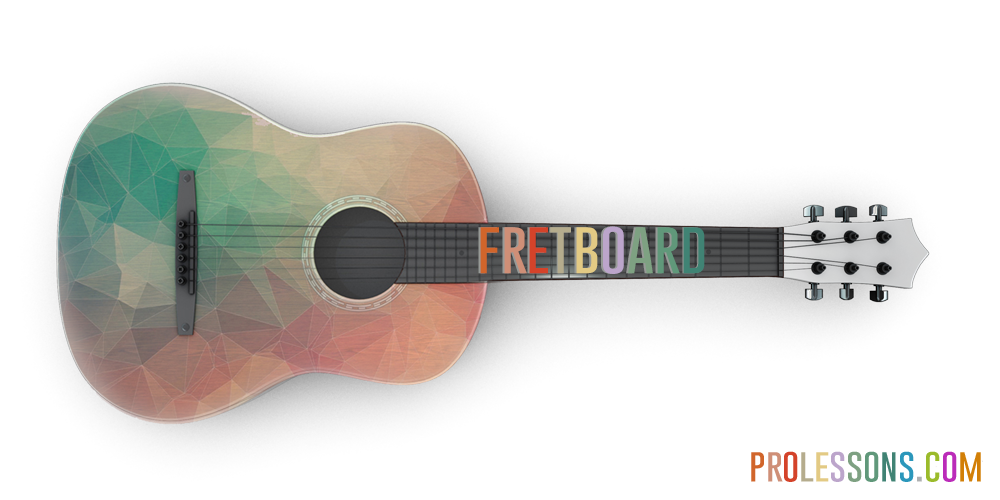 Guitar fretboard notes are the same musically as any other western instrument. The piano offers 12 semitones and so does the guitar. The only exception and real advantage on guitar is the bending of strings to produce the between tones which are also possible on a keyboard with a joystick or wheel. Musically speaking, these notes are difficult to describe and are used in blues and rock music mostly. Basically, you can bend a guitar string a 1/4 bend and it sounds real soulful and bluesy in the context of the following note. All other tones are just one of the 12 semitones. The guitar fretboard are sometimes hard to understand because, unlike piano, they’re not laid out in front of you so clearly. Guitar has patterns and once you see them, it makes much more sense. Let’s unpack the fretboard a bit and see if you can see the patterns better.

The notes that we have available are half steps apart. Let’s look at a C octave to get a view of them:

From middle C to the octave note above it, if you play and count every note, you will have the 12 semitones and all the musical notes you have available to you. You might say, “I thought there were flats?” Yes, of course! For the sake of argument, let’s put up the same 12 semitones but using flats this time. When you understand the sharps and flats, you’ll realize they’re the same notes only called sharp or flat to accommodate the key you’re actually playing in.

If the guitar is tuned to standard tuning, starting with the little string it will be E open, B open, G open, D open, A open, and Big E open. From now on, for the sake of naming the note, it'll just be “E0.” O meaning “Open.” These are the first six notes you need to know on the guitar fretboard. Make sure you use a good tuner and, starting with the little E0, tune up your guitar. Every tuner is different, but they will all identify these six notes. When your tuner needle or light is centered, you’ll find the correct pitch for each string and be ready to move on to the next level.

The Second or B String Notes

Following the same procedure as above, let’s do the B string notes. Starting with your first finger on the 1st fret of the 2nd string, this is a half step from B0 and is called C1. Move to the 2nd fret with the 2nd finger and this is a C# or Db. The 3rd fret note using the 3rd finger is a D. The 4th fret note using the pinky is a D# or Eb.

Now slide your hand down the neck and put your first finger on the 5th fret of the 2nd string. Keep the pattern going. The 5th fret note is an E, 6th fret is an F, 7th fret is an F# or Gb and the 8th fret note is a G note. Slide your hand again. The 1st finger now on the 9th fret and this note is a G# or Ab. 2nd finger on the 10th fret and you have an A note. 3rd finger on the 11th for an A# or Bb and finally, the pinky on the 12th fret for a B. Then they repeat at the 13th fret. A helpful chart for all of these can be found here.

The Third or G String Notes

Let’s streamline this a bit. You should have a running go at the pattern of fingers 1, 2, 3, and 4, then slide and do it again. The G string notes are as follows.

The Fourth or D String Notes

The Fifth or A String Notes

Once you know the guitar fretboard notes, you’ll be one step closer to unlocking your creativity and songwriting abilities. Another resource to add to your learning is online guitar lessons. The guitar instructors at Pro Lessons would love to be your go-to source for guitar knowledge. Find out how you can take advantage of our affordable plans by clicking below.