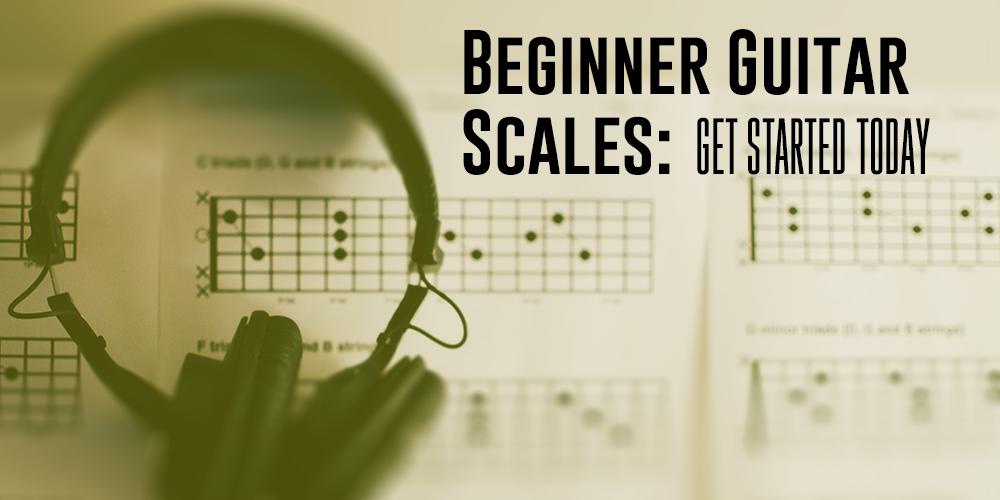 Scales make up the notes that we choose when playing any melody or tune. A scale can be Major, Minor, Diminished, etc. There’s actually a scale for each note of the scale when played diatonically that helps us understand and hear the seven basic modes. No need to get heady or complicated, just get started on the Major scales first and everything else will unfold as you begin to hear the musical 1/2 steps and whole steps. It’s not rocket science. Most hear it first and then learn to play it, so buckle up and let’s dive in to the beginner guitar scales.

Learning the fretboard is a must. Yes, you can go your whole life not knowing a single note you’re playing and still play great guitar. Think of how much better a musician you’ll be if you can identify each note you’re playing. The fretboard is broken down into six notes or open strings. As you move up to the first fret, you get six new notes. The same is true when you move up to the second fret and so on. For guitar, there doesn’t seem to be any rhyme or reason at first, but as you grow, you start to see patterns emerge. You could memorize the six notes on each fret vertically if you like, but it’s easier to memorize them horizontally because you can more easily see the scales forming. For example, a C Major scale can be played starting on the second string, first fret.

Filling Up the First 4 Frets

Let’s learn some beginner guitar scales on the first 4 frets. You’ll learn the names of many of the notes and get familiar with the basic Major scales of several cool guitar chords. Let’s start with A Major. A major has 3 sharps. You need to know this. Here’s the scales: A B C# D E F# G# A. You need to memorize where the sharps fall. If you’re counting them it looks like this:

The 3rd, 6th, and 7th scale degrees have sharps. This is unique to the key of A Major and/or F# minor, which is the relative minor to A. Music is a language and beginner guitar scales are an important piece. You’ll begin to speak it soon enough, just digest this in little bite size pieces. Here’s the A Major scale on the fretboard: 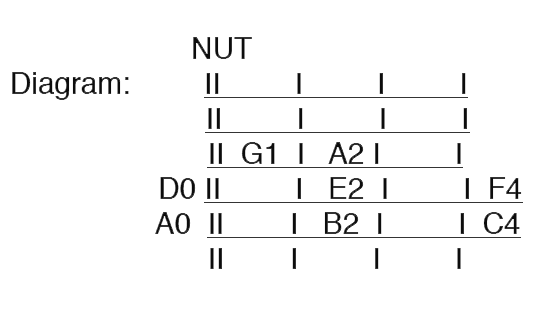 The B Major Scale 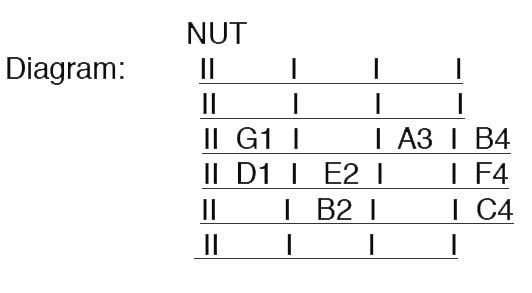 The C Major scale moves more vertically down the frets. Let’s take a look at it. C Major has no sharps or flats! Here’s how it looks in numbers:

Each scale degree is a natural note, which makes it easy to see and hear on the guitar. The notes are C3, D0, E2, F3, G0, A2, B0, C1. See if you can find the notes on the fretboard looking at the fretboard above. If that’s difficult, here’s the fretboard for C Major: 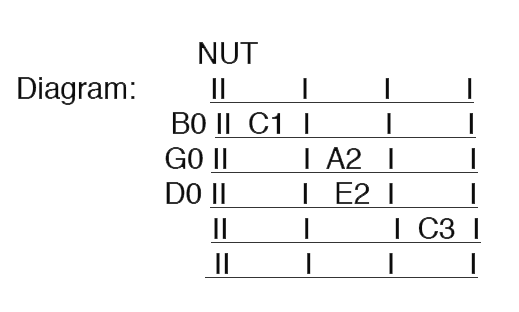 Notice the use of open strings. Make sure you play each scale forward and backwards. Go ahead! Play C3, D0, E2, F3, G0, A2, B0, C1. Play it as smoothly and as swiftly as possible. Play it over and over until it sounds right.

Let’s do this very easy D Major scale which has 2 sharps. Hopefully you’re memorizing each note name and where it is on the fretboard. If you are, then this is getting easier and easier, because as you do other scales, some notes are being reused. The D Major scale is D E F# G A B C# D. The 3rd and 7th scale degrees have sharps. The numbers look like this:

This should be starting to make some sense. You just need to memorize the fact that D Major has two sharps and know their location. See if you can play the fretboard version: 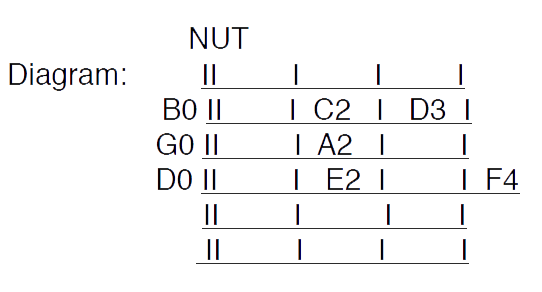 Notice the use of the F4 and C2. In the C Major scale, C1 was the root or tonic. To accommodate the C# in the D Major scale, you had to move over to a C2 or C#. These beginner guitar scales will get you on your way to understanding the guitar fretboard. Just hang in there and let’s add a few more.

Notice where the sharps fall. The 2nd, 3rd, 6th, and 7th scale degrees all have sharps. Memorize this and be sure to cross reference it on the fretboard below. 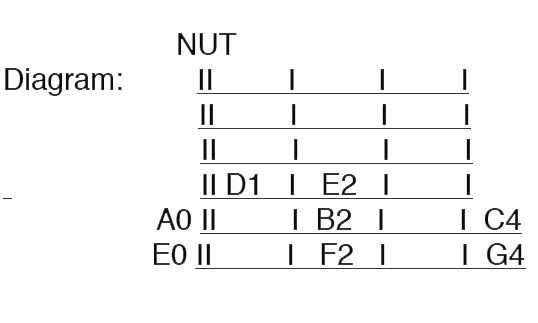 Since we are talking beginner guitar scales, we are limiting the scales to only eight notes. You can, however, extend the scales to two octaves and move on down the fretboard as you develop the concept. After a while, have you noticed that they all sound the same as far as the bright happy color thought goes? A Major scale is the same pattern from whichever note you choose, so they all have the same Do, Re, Mi, Fa, So, La, Ti, Do effect. Let’s do a couple more.

The F Major scale has one flat, or “b,” and there are no sharps. The layout reads as F, G, A, Bb, C, D, E, F. Notice the 4th scale degree has the flat. There are 12 basic keys. Fifteen if you include the 3 that double as each others' sharp or flat. There are sharp keys and flat keys. F is the first among the flat family. Here’s the numbers:

Again, it’s the 4th scale degree that gets the “b” or flat. Memorize this. Now, let’s look at it on the fretboard: 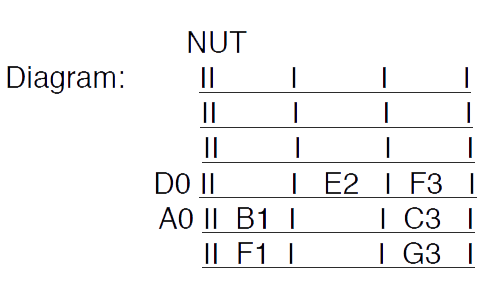 The B1 is your Bb, or 4th scale degree, in F. You’re starting to fill up the first 4 frets of the fretboard. Just one more of the beginner guitar scales and we can see what you’ve accomplished.

The 7th scale degree is F#, which is an F4 on the fretboard. This is hopefully making some mathematical sense at this point. The fretboard notes don’t really change, just how you use them. 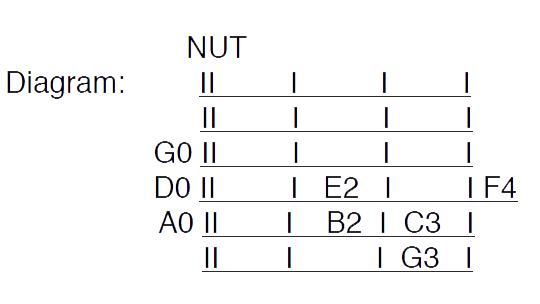 Seems like that F4 sticks out like a sore thumb, but don't you worry. If you play these beginner major scales over and over, you’ll stretch your hand muscles and work up calluses on your fingertips. This is exactly what you need to become a better guitar player.

Once you’ve learned these basic seven beginner guitar scales, you can put all the notes on one fretboard and see what you’ve accomplished. It’s astounding and you’re over the halfway point to learning all the major scales on the fretboard. Congratulations!!!

Here’s the fretboard you’ve filled in so far: 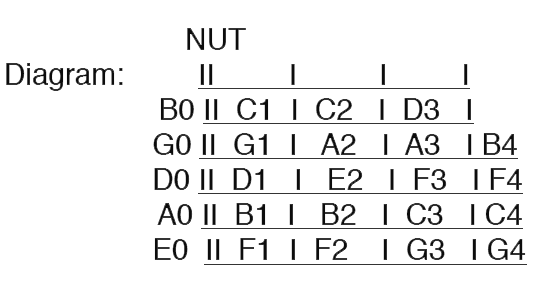 A has three sharps, B has five sharps, C has no sharps or flats, D has two sharps, E has four sharps and G has one sharp. You’re on your way! Keep at these beginner guitar scales and you'll be golden.

At Pro Lessons, we know how important it is to have the right knowledge when it comes to music. That's why our professional instructors are so eager to help you know exactly what you're doing. With lesson plans for beginner, intermediate, and expert guitarists, our affordable guitar lessons will get you moving in the right direction. Click below to find out more!