Notes on a Guitar: What and Where Are They? 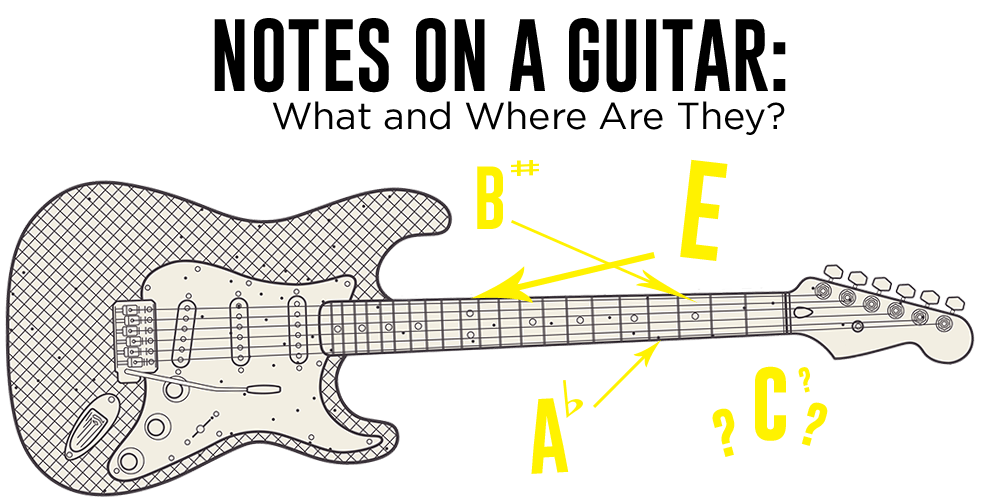 The notes on a guitar are the same notes on a piano or any other western instrument. The only exception is that on a stringed instrument, you can bend a note to a 1/4 step, 1/2 step, whole step or step and a 1/2. The guitar, like piano, is broken down into 1/2 steps and whole steps. Moving just one fret in any direction on a guitar is a 1/2 step and moving two frets in any direction is a whole step. It’s a little tricky with the open strings, but the principal is the same. The steps are harder to see on guitar than piano because the latter has its keys laid out in black and white. The patterns on guitar take some getting used to, but let's see if we can help you learn the notes on a guitar.

Half Steps and Whole Steps

It’s easy to see the whole step / half step concept in a major scale. Let’s take G Major for example. Let’s look at it linearly from the third string, or G string. G open will be your starting note.

It’s important to distinguish which notes in the scale are sharps and flats. In the key of G, the F9 is a F#. Also, pay attention to the 1/2 step notes from the third scale degree to the fourth, and from the seventh scale degree to the eighth. This is consistent with any major scale.

Sharps - Notes on a Guitar

You might want to get familiar with the sharps, flats, and natural notes on the instrument before you start bending them. C is all natural and the order of sharps is G, D, A, E, B, F#, and C#. You can download a copy of the circle of fifths to help you grasp this. The sharps simply start with G being 1#, D is 2#s, A is 3#s, E is 4#s, B is 5#s, F# has 6#s and C# has 7#s. Notice the notes are a fifth apart as you add another sharp.

Here’s a diagram of the sharp notes on the guitar:

B and C are each other’s sharp and flat. So are E and F.

Flats - Notes on a Guitar

Here’s a diagram of the flat notes on the guitar:

Naturals - Notes On a Guitar

The natural notes can best be seen from the C Major scale. The notes are C, D, E, F, G, A, B, and C. You should take time to identify all the natural notes on the fretboard as you’ve explored the sharps and flats. Knowing the fretboard is the secret to mastering guitar. The more familiar you are with how to navigate the neck, the better and more fluid a player you will be.

Here’s a diagram of the natural notes on the guitar:

It will help to grasp the fretboard from the concept of moving up the neck vs. moving down the neck. As you move up the neck from E0 on the 1st or little string as demonstrated below, you will get the idea of the in-between notes or #’s. The first fret note is F, then F# to G, then G to G#, then A, A #, B, C, C#, D, D# then to E on the 12th fret. Memorize this and then start on the B string and do the same. There are only seven notes of the alphabet in play here. Don’t worry about H through Z.

Here’s a fretboard with the naturals and the sharps:

The flat notes are easier seen as you move from high on the neck downward to the first fret. Let’s look at the Big E string or 6th string. Go up to the double dot or 12th fret. Note each fret and move downward slowly. The 12th fret note is E12, the 11th fret is Eb, then D to Db, then C. The 7th fret is B, then Bb to A, A to Ab, then G, Gb, and F. Then finally you end up at the open note Big E0. Memorize each string backwards from the 12th fret moving downward to the open string and identify each in between note or flat. It’s better if you say each note out loud. Your brain will memorize them easier that way and your ears will identify the pitch with the note name.

Here’s a fretboard with the naturals and the flats:

Remember that Cb and B Major are the same sound by just different key signatures.

You can see there’s a lot to unpack here with the notes on a guitar. Just take it slow and memorize one string at a time. Learn all about your sharps and flats and don’t get bogged down in the math. It really does take a lifetime to truly master an instrument like guitar. Even when you’ve been at it for a long time, there’s always more to learn. It is a wonderful and joyful experience and people will reward you for your hard work and persistence, but most of all you will feel good about having done the work.

Part of that hard work comes from practicing on a consistent basis and taking guitar lessons. It may sound more rock’n’roll to teach yourself, but even the homegrown guitarists can learn a thing or two from sitting under a more advanced teacher. At Pro Lessons, our instructors are professional musicians who tour the country every year. With a variety of skill levels and student packages, you can find the right fit for your learning needs. Find out more about our affordable prices below.