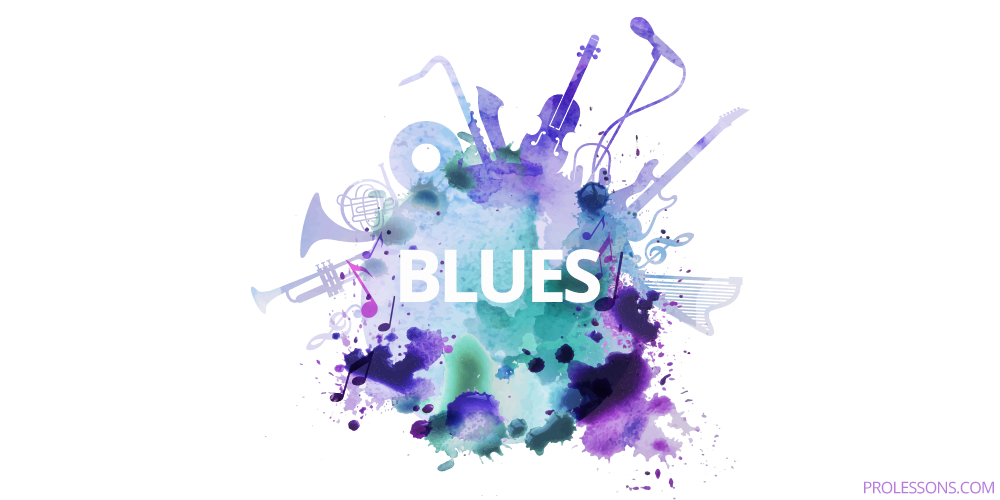 Blues is a sound as much as it is a style. You can give two different guitar players the same amp and guitar and ask them to play the same song. Both may take a stab at say, “Stormy Monday” by B.B. King, but may interpret the blues very differently. One might pretty it up with jazzy chords while the other guitarist keeps it basic but have more soul cry in the licks. Most would say the soul cry player is a real blues man. If you get it too pretty, you tend to overplay or lose something in the delivery. “Slow down and take your time son,” said one great blues guitarist. Blues Guitar 101 is making it talk or say something. The guitar has to weep and moan the blues. That’s the difference. Let’s try to break it down.

You can play the blues any time you want, even on a bright sunny day, if your girl’s gone or you can’t pay your bills. The blues is your soundtrack. You may be the most upbeat person on Earth, but when it all comes crashing in on you, you just play different. That’s the time you most need to pick up your guitar, find a key that fits the mood, and begin slowly letting the notes find your soul portal. When you make the connection, there’s nothing like it. Folks will stop and listen and, though they can’t quite put their finger on it, they just understand what you’re trying to say through the music. It’s a hard place to live and not many can fake it. Unlike most of us, the real blues legends lived it. They paid a price we’ll never pay. Who among us has worked sunup to sundown in a field picking cotton in the Mississippi heat only to come home with barely enough money to eat, much less pay the bills or put shoes on the kids feet?

The blues scale and minor pentatonic scales have the most basic of notes and, again, get real simple. For example, in the key of A Major, if you play a minor pentatonic scale, you play the notes A, C, D, E, and G. Just five notes are being used, thus the term pentatonic. The blues scale, however, adds a b5 into the mix and the notes would be A, C, D, Eb, E, and G. You can grab the five positions on the guitar fretboard online for these two classic blues sounding scales and play them for days. You should get very familiar with all five positions, but just playing them mechanically doesn’t sound very soulful at all. In fact, it just sounds like an exercise. The missing link is now twofold. First, you need some more technique. Secondly, you need some more soulful expression. The former we can help you with, the latter will come by much weeping and gnashing of teeth.

The difference between the blues and other styles of music isn’t that big at all. In fact, you’d use the same techniques in rock, country, or jazz. There are a few we must look at because you’ll need them to play the blues. Sliding notes means sliding from one fret to another smoothly but only striking the string once. By doing this you get multiple notes with only one pick or finger strike. Hammering On is when you leave one finger on a note and strike that note with the pick and hammer another finger onto a note on the same string a fret or more down. You strike the string with the pick or finger but again get multiple notes. Pulling Off is when you hold a note and strike the string with the pick or finger and pull the noted finger off while there’s another finger or open string in front on the same string. This lets you get multiple notes with just one pick strike. Bending is when you play a note and, with the assistance of the other fingers, you push that note up or pull it down as much as a 1/4, 1/2, whole step or more. These four basic techniques are Blues Guitar 101 and really help in any style. There’s an imperfect perfection to it that is unique to each player. It takes work!

The Soul Connection of Blues Guitar

Once you’ve played the blues and pentatonic scales in all positions for hours, then you can let go. Stop thinking and start listening. Whether you’re alone or with a band, let your fingers do the talking. You can actually sing the notes you’re playing. It doesn't matter if you start on the root or the minor 3rd. Start on the b7 if you like. But, when you start, take your time and settle in. Play each note as if you mean it. Use vibrato, slide, bend, pull off and hammer on. Let your voice be heard through your fingers. It must be melodic, but it doesn’t have to be melodious. It can have an edge or imperfection to it that reeks of uncertainty. The mystery must remain in the story you’re telling. You gotta make the faces too. Rare back and dig deep. Let all the pain you’ve been facing ooze out of every note. If you ever taste it once, you’ll be ruined. That moment when you break away from time and space and play so soulfully and yet skillfully that everyone in the room is on their feet. That’s the difference between the guys who know how to play blues and those who have experienced and know how to feel the blues.

It is no small task explaining the art of the blues, but maybe this little dose of Blues Guitar 101 gives you the sense that it doesn’t come easy or it comes with a price. You should listen to some of the greats like Mississippi Fred McDowell, B. B. King, Robert Johnson and others. If that’s too old world, listen to Stevie Ray Vaughan, Robben Ford, and some of the newer guys. You’ll find your touch of the blues somewhere in the mix. Learn a little from all of them and find your own style.

Now that you know about Blues Guitar 101, it’s time to dive deeper into the world of guitar. When you enlist in guitar lessons, it opens the door to more guitar knowledge than you could hope for on your own. At Pro Lessons, our experienced instructors will get you rolling in no time. Find out more about our affordable rates by clicking below.