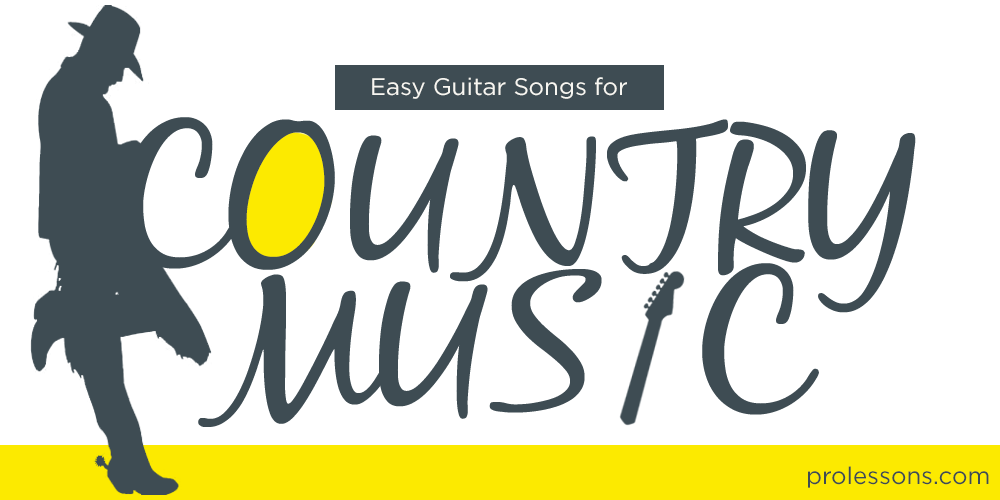 If you’re into country music, guitar is a given. From classics to the most modern country tunes, guitar is the common thread. Piano driven tunes come around once in a while, but synth tunes almost never (Although lately rap has made it’s way into the country realm). Country and Western, as it use to be called, has evolved like everything else. For the musician, there have been a few easy guitar songs to come along during that time.

From the 1940’s forward, western swing and mountain music kind of morphed into a sound unique to greats like Hank Williams, Patsy Cline, Merle Haggard, Willie Nelson, George Jones, George Strait, and many many more.

There are just too many songs to get bogged down in which ones are the best, so let’s just throw out the first easy guitar songs for country that come to mind. How about “Hey Good Lookin’,” “Jambalaya,” and “Your Cheating Heart,” which are all Hank Williams’ classics. You’ll love the swing to these tunes. There’s a simple 1/4 note pulse to them that makes them super easy.

“Walkin’ After Midnight” and “Crazy” are our favorite Patsy Cline numbers. “Crazy” sounds complicated but it’s not so bad. “Tiger By The Tail” by Buck Owens is awesome and it’s pretty swift, so you have to work to keep up. Merle Haggard had so many hits it’s hard to even start, but you gotta do “Momma Tried.” “If We Make It Through December” is a sweet tune too.

Willie Nelson had some easy guitar songs like “Blue Eyes Crying In the Rain,” “Angels Flying To Close To the Ground,” and “On the Road Again.” You understand there are many more but these are pretty easy and people will know them for sure. Iconic country singer, George Jones had some greats like “He Stopped Loving Her Today,” or “Golden Ring.” An acoustic guitar is the centerpiece of almost every hit. The 60’s and 70’s were full of these rhinestone cowboys and gals.

If you’re a country enthusiast, jump on the bandwagon with us here and let’s pull up some super easy guitar songs like “Walk On By” by Leroy Van Dyke, “Please Help Me, I’m Falling” by Hank Lockin, “She Thinks I Still Care” by George Jones, and “Okie From Muskogee” by Merle Haggard. These are all country songs that maybe not everyone knows, but country fans love.

There’s a few easy guitar songs that you’ll remember even if you’re not a country fan. Some of these include “Tulsa Time” by Don Williams, “Coat of Many Colors” from Dolly Parton, “Take This Job and Shove It” by Johnny Paycheck, “Good Hearted Woman,” by Willie Nelson and Waylon Jennings, and “Mamas Don’t Let Your Babies Grow Up To Be Cowboys” by Waylon Jennings.

The 60’s and 70’s were the days of purest country . Another batch of country songs that you can play on guitar are “I Walk the Line,” “Sixteen Tons,” “Crazy Arms,” “Ring of Fire,” “Coal Miner’s Daughter,” and “Make the World Go Away.” Most of these are 3-4 chord easy guitar songs for country. In those days, it was more about the story than hitting a killer solo.

Like pop and rock music in the 80’s, country music moved more to the slicker side of things. Some loved it and some hated it, but a good song’s a good song. There are some that stand out from the 80’s you might wanna add to your list of easy guitar songs.

“Always On My Mind” by Willie Nelson, “Forever and Ever Amen” by Randy Travis, “All My Rowdy Friends” by Hank Williams Jr., “Swingin” by Jon Anderson, “Houston” by The Gatlin Brothers, “The Closer You Get” by Alabama, “Looking For Love” by Johnny Lee, and “I Was Country When Country Wasn’t Cool” by Barbara Mandrell are all great songs from this era.

The quality of recording got way better in the 80’s and these songs reflect the improvements in that industry for sure. If you have a good ear, notice the theme of an acoustic guitar being at the center of almost every hit. You should take a look at this list of the best 500 country songs. We think you’ll find almost every song is guitar-centered and pretty darn easy to play.

The 90’s exploded with hot new country artists who shot to the moon and gave us dozens of mega hits and mega stars. It seems the 90’s were kind of the apex of pop country music, like it or not. The songwriting got more clever and the music production got way slicker. Here are some easy guitar songs from this era.

“I Still Believe In You” by Vince Gill, “Achy Breaky Heart” by Billy Ray Cyrus “Boot Scootin’ Boogie” by Brooks and Dunn, “Here’s A Quarter” by Travis Tritt, “Bubba Shot the Jukebox,” by Mark Chesnutt, and “Strawberry Wine” by Deana Carter. At this point these songs are considered classics, but that’s just the funny way time works. It’s still a new day for country music and most people will enjoy your rendition of these great guitar-driven songs.

Country in a New Millennium

Production, production, production. Country music has morphed into a weave of steel guitar, fiddle, rock guitar, and Def Leppard-sounding drum kits. Sounds are always changing and that’s what the people want these days. Still, there’s redemption in it for the guitarist who just wants to learn and perform a great song. Artists like Brad Paisley, Keith Urban, Taylor Swift, and Alan Jackson still swing a mean acoustic guitar around their neck and sing like they mean it. Here are some picks that’ll get your attention.

“Somebody Like You” by Keith Urban, “It’s Five O’clock Somewhere” by Alan Jackson and Jimmy Buffet, “Love Story” by Taylor Swift, “Wild Horses” by Garth Brooks, “How Do You Like Me Now” by Toby Keith, and “Something Like That” by Tim McGraw are just some of the great guitar songs to come out of country in recent years. The list could be as long as you want it to be, but we’ve given you a good foundation from which to build. Find your favorites and create your own set list. If you want to hop over to another genre, here are some easy rock and roll songs to play on guitar.

Learning easy guitar songs is only one part of the journey to becoming a great guitar player. To really understand your instrument, you’re going to want some guitar lessons. Fortunately for you, the professionals at Pro Lessons are here for your every guitar need. We have guitarists from acts like Brantley Gilbert and Taylor Swift who want to help you get better at guitar. Click on the link below to find out more about our affordable rates.