How to Play Electric Guitar Like a Rock Star 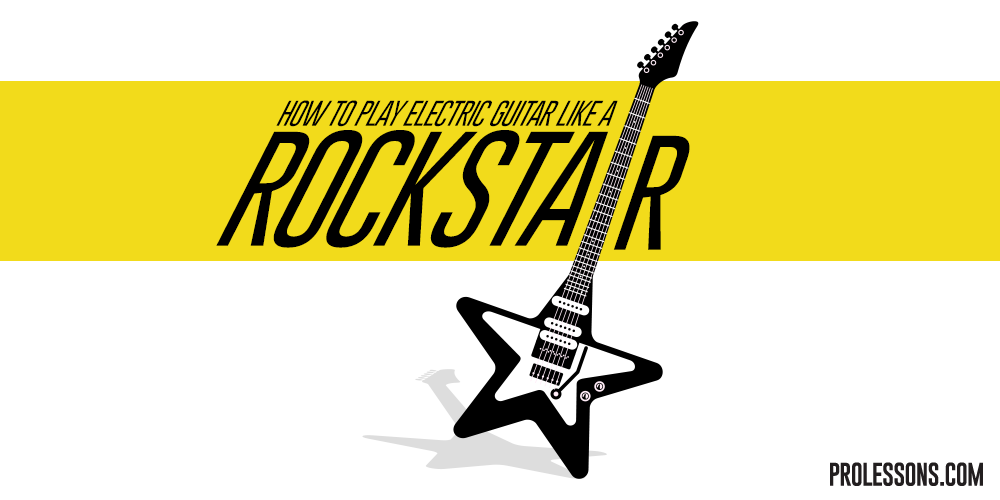 Aside from big hair, you might be wondering how to play electric guitar like a rock star. Ok, there’s probably some things you can add to your persona that will catch the eye of the chicks, but nothing speaks rock star like cool hair. If you don’t have hair, maybe you should invest in a really cool hat. Add to this the right clothes and boots or sneakers and you’re almost there. Let’s move beyond the clothes. Yes, you got to have the moves and stage presence. It’s not enough to just play great guitar, if you’re gonna be a rock star, you gotta have the swag. Perception is the name of the game. Show up with groupies and a guitar tech and you’re getting closer. Still, you have to be able to play. Let’s see what else you need to know to perfect how to play electric guitar like a rock star.

So you’ve got the torn jeans and Buckle boots? Got the shades and the tank top with stars and stripes? Tattoos are optional, but it can be cool if you’ve got the muscles. You should probably work out too if you’re gonna be a rock star. Flabby is not hip at all. A six pack and some big biceps and you’re almost there. Enough about appearances, though. Can you play guitar? Strap the thing on with a very cool strap and let it hang low like Slash. You got the leather wristband with spikes and the eyeliner, now go! What are you gonna play? Rock stars like to swing their guitars down low below the waistline. If you’re going to play power chords all night that’ll be ok. If you’re going to shred at all, though, you might find it hard to do. While it may not look as cool, moving the guitar higher up might make it easier to play.

Who you consider your hero really depends on who you listen to and who you want be like. If you’re into Bruce Springsteen, a Telecaster swung low will get it done. You don’t have to shred either, just swing your arms out far and pound big fat power chords. However, if you’re into Kirk Hammett of Metallica, you better have some guitar chops. If you’re reading this, you’re likely an up-and-comer and we want to steer you right. First, are you taking lessons and getting your scales and exercises down? How many hours a day are you playing guitar? While you’re letting your hair grow out and working on that tan and six pack, you should be spending at least four hours a day playing music on your guitar. The greats boast of playing 10 hours a day. You got that much passion? Rock star status is usually earned. Hard work and relentless hours go into making a real rock star, not these goofy wannabes. Good looks alone won’t get it done. You better have something under the hood if you're trying to convince others that you know how to play electric guitar.

How To Get The Chops

Have the chops and you’ll get the fame. “Rock star” is a pretty broad term. You can be a pretty boy doing a sweet little pop tune in tight jeans or you can be a hard rocker in leather and chains, but both would fall under the same term. Either way, you gotta be able to play. Remember, you don’t have to have the same hours that Steve Vai has in to be successful. You just have to have your tunes down really well. If you’re forming a band or going it solo, form your set list of 12, 18, and 25 tunes. You’ll likely do 45-minute and even 90-minute sets. You need at least two dozen songs you can play blindfolded and never miss a note. You don’t have to be the best improv guy or gal either. You can play the cover tunes and nail the solo lick for lick like you learned it from tab, but it’s gotta be great. Hours and hours of repetition is the only recipe for being a true rock star, because if you don’t know how to play electric guitar, no one cares.

Break It Down For Me

If you can take the song apart a section at a time and define each and every chord and riff, then put it all together and play it in time with the right tone and vibe, you are so close. If you’ve got your guitar in tune, cool hair and clothes, and you can play 25 songs effortlessly, you’re ready to join the band and hit the road. Once you’re not thinking about the next chord or section, you can start to have fun. Running around, rocking the headstock up and down, swinging your dreads around and making all the right faces. Just don’t sacrifice the guitar chords and notes for all the running around. If the music isn’t good, it doesn’t matter how cool you look. But when it all comes together and you get it right through the whole show, people will know they’ve been in the presence of greatness. Being a rock star comes with some serious responsibility you know. When you begin to influence others, you won't second guess every action and make sure it doesn’t lead some young kid down a path you didn’t intend. Just because it’s art doesn’t give us the license to lash out. Be a rock star with class.

Seriously, you can rock guitar with all the fixings and still be a down to Earth guy or gal and people will love you even more. It’s ok to rock and be normal too. Always smile and wave and when people applaud, bow and show some class. Sincere appreciation goes a long way with your fans. Every fan is a potential record deal or gig at Madison Square Garden. You never know who’s in the crowd. There is a theatre aspect to rock music, but the real respected rock guitarists who have lasted gave us theatre and great guitar too. You can do both and if you can do it without exploiting others and spiralling out of control, you will have the best chance of reaching the top and lasting.

If you don’t really know how to play electric guitar like a rock star, it sounds like you might need some guitar lessons. When you take advantage of the affordable rates at Pro Lessons, you get to learn from a number of experienced guitar instructors who have made a career out of music. Find out more information on how you can get started by clicking below.