3 Keys to Guitar Playing You Should Know 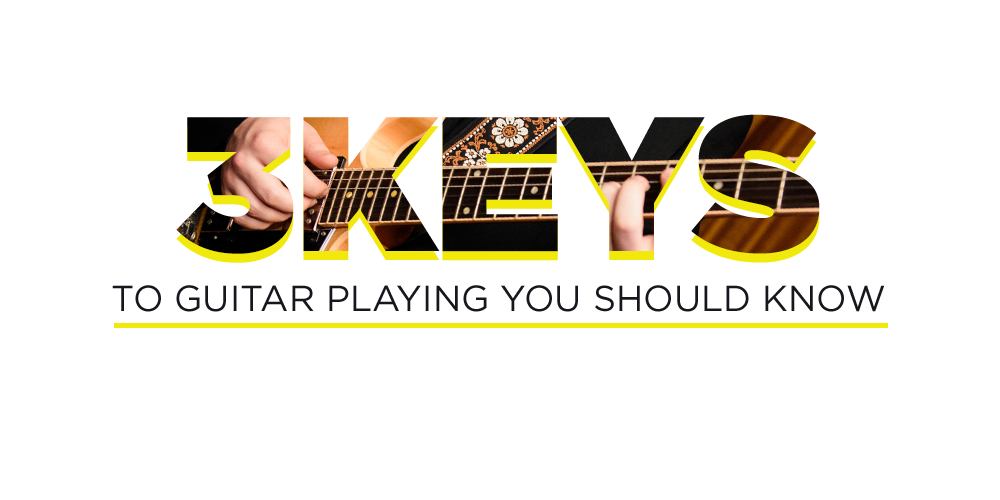 If you compare the grand scope of all things guitar to outer space, there’s a whole galaxy of guitar planets. Some have rings, some have craters, some have moons or asteroid fields, and others just seem to sit out there in dark space. In other words, there are Steve Vais, Jeff Becks, Phil Keaggys, and a long list of other amazing guitarists, but no two of them are alike. In fact, it’s hard to even compare and label one better or brighter than the other. Then there are countless other stars or great guitarists who fit into their space and have as much gravity but just don’t have the name or credibility . It doesn’t even matter. There’s the unknown 14-year-old doing his best to get in an hour of practice each day, a Steve Vai putting in 10 hours a day on guitar, and an untold number of players in between. The reality is we’re all in this together. The world of guitar is vast and a beautiful tapestry of kin. We are family and, since we’re family, we want you to know that there are at least three keys to guitar playing you should know. How you get there is unique to you. You are you, and that’s what makes the world of guitar so wonderful. Let’s explore a bit, shall we?

There’ll be tangible and intangible influences on your journey as a guitarist. You may have been inspired by the bluegrass pickers on Saturday morning at the barbershop and know them by name. You may have seen Eddie Van Halen at the NAMM show and you were totally inspired by the music even though he never spoke to you. However, you are what you eat. What you listen to will determine how you sound as a guitar player. If you listen to a steady diet of heavy metal, you’re probably not going to be a great jazz guitarist and vice versa. Yes, listen and get a taste for all kinds of guitar playing, but pick the flavors and textures you enjoy. Eat the meat and spit out the bones. Take a little something away from all genres or great players, but give yourself a healthy portion of the music you love and stay with it until you are known for it.

Get as many styles under your belt as you please and be able to play a convincing flamenco or blues shuffle. You’ll work more as a session player or a weekend warrior, but decide who you are and maximize your sound. Larry Carlton can have a voice in your playing but you can totally get raw and reckless like Stevie Ray Vaughn and still be in the same wheelhouse. Don’t get too diverse or you’ll just be a wanderer. No one will really know what you’re good at. Be known as a soulful rhythm guy if that’s you’re thing. It’s ok if you don’t have a reputation for shredding and laying out perfect solos. Everyone has their place in the band. If you stand alone as a performer like Phil Keaggy, that’s awesome. You’re not him, though, and a looper won’t make you him either. Be your own musician.

Your hands are the weapons. A great guitarist can pick up a bad guitar or one that isn’t set up very well and still make it sound reasonably good. However, your hands are only as dangerous as what you put in them. One key to being a great guitarist is knowing your fretboard. Exercises, scales, and difficult musical phrases are important to do on a daily basis. They keep your fingers limber and your fretwork fluid. We’ve all tried to run in late and rip into some piece we haven’t played in a week and found that our fingers felt like they were superglued together. Even the Steve Vais of the world demand a warm-up before the show. There’s just too much expected from your fingertips to assume that you’ll get it all right on talent alone. The fretboard will humble you in front of people if don’t respect it. Hundreds of reps are required to really own a difficult piece. Step away, then stretch and come back to see if you can nail it without an error.

Some guitarists are known for winging it. Hey, some of these greats don’t even know what note or scale they are playing in. Who cares? Buddy Guy is Buddy Guy. Not that he doesn’t know, but assume he doesn’t have a clue about the theory. He still voices with his hands the things he’s feeling and we pay money to see it. Besides, who doesn’t like a polka dotted guitar? The point is to be yourself. Gather the licks and musical bullets that make you sound like you. Perfect them, add to them, expound on them, and drive it home, friend.

Key #3: Own The Best Guitar That You Can Afford

Again, if you’re good, you can pick up a guitar in rough shape and make it sound like something. Your personal gear, though, should be at its peak performance. Ever wonder why the greats of the guitar family stick with the same guitars for years and it becomes part of their signature? It’s for several reasons. One, it is the tone that inspires them. BB King’s big Gibson hollow body made BB sound like BB. Willie Nelson’s Martin classical guitar made him famous. The tone inspires the player. Two, the feel of the neck and the contour of the guitar’s body against the body of the person responsible for the guitar playing is a big deal. There are many guitar neck shapes and thicknesses. One of them fits your hand better than the others. Also, after you’ve worn down the finish and broken it in, the neck just seems to fit your hand better than any other guitar. Three, the conversation is just richer when you’re playing the strings of the guitar that brought you to the dance. Make sure you take good care of her. A good setup by an experienced owner always helps, so learn how to do it yourself. It’s like the carburetor on an old Mustang: she’s a little temperamental and requires a light touch and a little love now and then.

Listen, there are plenty of other keys to guitar playing, like “listening while you’re playing” or “relaxing so you can settle in and stay in time.” Advice is plenteous. Don’t be overwhelmed, just get started on the journey and take it one note at time. Guitar playing is like having a conversation, so don’t play what you don’t mean. Say exactly what you mean to say with your fingers.

Another key to guitar playing is to take guitar lessons from someone who is better than you. How much they know themselves will be the limit for how much they can teach you. That’s why the instructors at Pro Lessons are such an asset for guitar players like you. These teachers have made a career out of the road and now they’re looking for students to help at every skill level. Click below to find out how you can take advantage of our affordable rates.