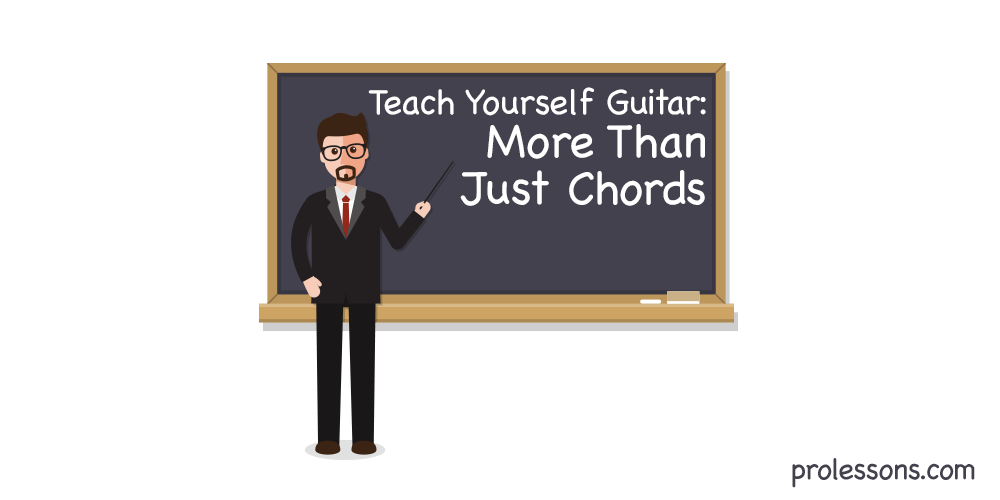 It is interesting how so many singer/songwriters can only strum the guitar enough to write or perform a song. Maybe they just never were interested in creating the lead lines or fills and just left that to the studio guys or perhaps they simply didn’t want to put in the endless hours of wood shedding it takes to be really good at soloing. No matter where you fit in, you can teach yourself guitar and know how to play more than just chords. Imagine going into the studio prepared and being able to show the lead player what you want. That’d raise some eyebrows. Especially when they're used to creating it on their own. Suddenly you're on the creative end making decisions. That’s awesome!

Why Am I Stuck On Just Chords?

It’s very easy to get stuck strumming the guitar, especially if you’re a writer or artist in some genres. If you’re in the country or folk markets, you probably wouldn’t lead from an electric guitar. It’s much more common to see a country or folk singer performing from acoustic. You may have just never ventured from the chords or tried to solo. Maybe you’re pretty new at this and chords just seem easier. Either way, you’re stuck on the chording aspect of guitar and it’s time to try some fills or even solos if you’re going to teach yourself guitar. First, you hopefully realize that the chords are the harmony aspect of music and that’s a good place to start your new journey.

The Harmony Vs. The Melody Aspect Of Music

You’ve been strumming a good while and maybe you don’t know it, but there are three notes that make up the major or minor chord you are playing: the root, the 3rd, and the 5th degrees of the scale. If it’s a C Major chord you’re holding, look at the notes. Your first finger is a C, your second finger is an E, and the 3rd finger is also a C. You have the 5th scale degree with the open G string. Also, the little e is open. Still, you’re playing all C’s, E’s, and G’s. When you strum all the strings together, it’s harmony. If you simply pluck any of the three notes of the chord, it’s suddenly melody. Try just playing the E2 note on the 4th string four 8th notes, then play the G open string four 8th notes, finally add the C1 for eight 8th notes. It’d look like this:

Play this three times then strum an F chord.

Now strum a C Chord eight strums, then strum Ami eight strums. Strum a C chord again for eight strums and then strum an F chord and let it ring a whole note. Imagine the lead line you played above while you’re strumming through the chords. This is a very simple example, but it helps you to hear how easy it can be to play a lead line or even a solo. It doesn’t have to be fast and technical to be nice melody work. When you get good at doing the lead line, you can blend the higher strings of the chord with the lowest note you’re playing and combine the two together for a more folky or jangling sound. There’s just so much you can do when you teach yourself guitar the right way. Get started!

Birds Of A Feather - Teach Yourself Guitar

If you really want to start playing melody and lead lines, the next step is to go ahead and learn the appropriate scale family for the key the song is in and the brother and sister chords that you’re playing with that key. For example, if you’re in the key of C, the 4th and 5th scale degrees are F and G. Technically we call it the (F) sub-dominant and (G) dominant. But you can simply think of it as F being the sister and G being the brother. You might also have an A minor in the song. In the key of C, A minor is the relative minor to the key of C, so you could think of it as a first cousin if you will. C, F, G, and Ami are the typical chords you’d find in a song in C. Well, C and A minor share exactly the same notes when playing the scale. C is C D E F G A B C and A minor is A B C D E F G A. All are natural notes and just start on C or A to accommodate the key. F has one flat note, Bb, and G has one sharp note with F#. So by reason, if you play the notes C D E G and A, these notes are all in common with all three keys. So any line you play using these five notes would be safe. Now it might not sound flashy or impressive, but you’d be correct. Looking for the common notes is theoretically correct, but you can certainly use the in between notes to jazz it up.

The In Between Notes - Teach Yourself Guitar

Ok, C Major is C D E F G A B C. However, chromatically you have 12 semitones from C to an octave C. They would be C C# D Eb E F F# G Ab A Bb B and C. The notes in between the Do Re Mi Fa So La Ti Do sound are the half steps in between. By adding a flat 5 note, or Gb, into a minor pentatonic scale, you’d get a blues scale or sound. Are you getting the sense that it’s important to know your scales? It really is. Don’t be discouraged or overwhelmed, just get started. A “minor pentatonic scale” is just five notes of the minor scale for the key you’re in. For C minor, the notes would be C Eb F G Bb. Notice you have added some notes in between like Eb and Bb. This is no longer a major scale. It now has a minor 3rd (Eb) in it, so it’s a C minor chord. But knowing the notes in between are useful can really open your ears when you teach yourself guitar. You might have to stop and learn a C minor chord first. Just do it!

Here’s a list of important things to do as you start doing lead lines and solos.

This will keep you busy a good while. There are plenty more and you will need to learn your modes too. Just don’t panic. Start today and learn a little each day. It’ll all come clear and start making sense and your playing will improve immediately and start making musical sense. You can do this!

Even if you want to teach yourself guitar, guitar lessons are a great way to supplement your learning experience. Whether that means enlisting in online guitar lessons or finding a teacher in your area who can see you twice a month, having someone more experiened than you imparting their wisdom is a great tool to have. At Pro Lessons, our instructors are well-versed in all things guitar and they are eager to help you out in your journey. Find out more about our affordable rates by clicking below.