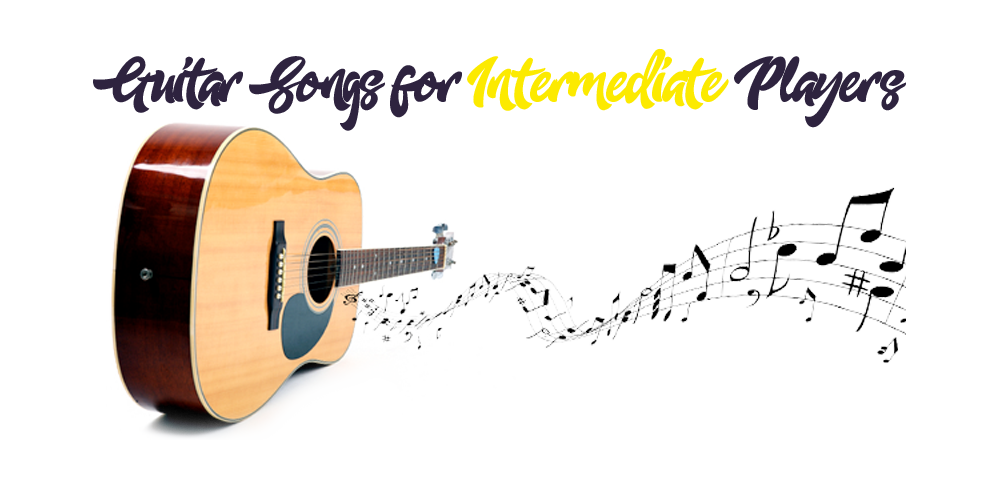 Almost any modern pop song or new country single is playable on guitar. Most of these tunes have only four chords with more effects than actual riffs. In country music today, the solos are more reminiscent of the rock songs of the 70’s and 80’s. Those solos might give you a challenge, but for the most part, it’s power chords or basic chord changes. If you consider yourself to be an intermediate guitarist, you’re in a good place as most of these songs are doable. We’ll toss a few guitar songs your way and maybe you can grow a little in the process.

“One Headlight” by the Wallflowers

In the key of D, this tune is G, D, F#7, and Bmi for the verse and the chorus is G, D, Bmi7, and A. There’s a muted guitar that goes around the changes and a lick or two in the verses, then the chorus opens up to power chords. There’s a slide lick or two and it’s really the tone that’s important. It sounds like a Fender amp cranked up with a tube screamer. If you’re looking for guitar songs for intermediate players, “One Headlight” is a good contender. The solo isn’t fast, it’s just soulful and cool.

“Free Fallin’” by Tom Petty and the Heartbreakers

You can’t get any more cool than this tune. It’s in the key of F which means you should capo on the 3rd fret and play in D. D, Dsus, D, and A over and over is how you play this one. The electric guitar emphasizes the rhythm phrase while an acoustic strums through it. The solo is a simple low string riff that’s super easy. Sounds more like a baritone guitar, but you could easily do it on a regular guitar. Then there’s a single 8th note thing midway that’s very cool. Jump into this one and jam along. It’s fun to play.

“Bruises” is basically a country vibe and the chords are very simple. It’s in D once again, but it’s capo 7 and played in G. G, C, Emi, and D are the chords you’ll want to play. There’s a minor change or two but the rhythm is consistent throughout. Whether you play it in the D position or with a capo, it’s super fun and easy to jam along with friends. The pre-chorus and the end of the chorus moves pretty quick from chord to chord and there’s a 7th chord or two, but you’ll make it happen. Just go over the chords first and see if you can hang in there at their tempo. If not, slow down and play it by yourself for a while, then turn on the track and play along. You’ll get it eventually.

“Wild Horses” by The Rolling Stones

This is an acoustic ballad that is certainly easy enough to play for an intermediate guitarist. The chord changes aren’t typical which makes it unique and fun. It’s in the key of G and the strum pattern is doable for sure. There are two or three guitar parts including a 12-string guitar. Notice the whole note chords or diamonds throughout the verses. There’s also some chimes. Then the chorus takes off and there’s a 7b or F in there. You’ll have to consolidate the parts if you’re the only guitar player. That’s kind of fun, though. Just pick the main part and add in a riff or chime here and there. The electric guitar does some cool riffs throughout the song and there’s a solo too. There’s nothing difficult about what he’s doing. See if you can work out the solo and you’ll have one of the great guitar songs under your belt.

If you want a rock classic with a very cool guitar riff, this is for you. Yes, it’s got some swift hammer ons, but you can do it. If you’re just breaking into the rock thing and you have slow hands, you’re in good company. Just take on bite-sized pieces and grow.

A tune like “Walk This Way” is one of the good intermediate guitar songs and you’ll feel good about the reaction you get from friends when you crank up the intro. Work on recognizable tunes so people will see you as a seasoned player. You have to play a song like this for hours to get it sounding just right. Don’t try to wing it. That’s what make you sound like a beginner.

To get to the next level, you have to get some hours under your belt. You gotta do the riff and then throw in those octaves at the same time. It’s possible! It’s about timing and being so familiar with the move till your hands just slide into position perfectly every time.

This is a fun tune and a great riff for an intermediate guitarist. In the key of A, you get a great blend of classic rock and a smooth riff for the intro or hook. One of the things that make a good intermediate guitarist is the ability to complete songs. Many beginners play bits and pieces of a tune and sometimes they are unrecognizable. Take on this classic rock tune and play it from start to finish and treat any other songs you play that way too. Better to play five songs all the way through and be recognizable than play 20 songs halfway.

No matter what genre of music you like or what song you’re dying to play, you’ll need to dig in and learn the tune well. There’s an endless supply of guitar songs and choices. Take each song and play it till you can do it with your eyes closed. Don’t settle for average. Really sell the tune and, no matter where you’re jamming, give it your all.

One thing that will really help you as you try to become a better guitar player is to enroll in guitar lessons. A lot of the instructors and websites out there only cater to beginner players, but Pro Lessons has what you need for a variety of skill levels. Find out how you can learn from experienced players at an affordable rate by clicking on the banner below.