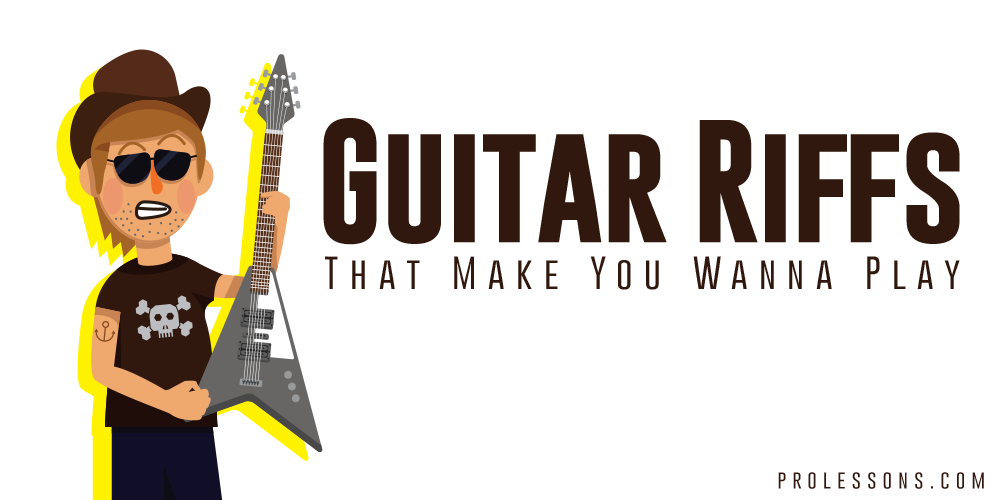 You might remember your dad trying to figure out how to play “Raunchy” by Duane Eddy or “Wipe Out” by the Safaris. Check them out, they’re fun guitar riffs from back in the good ole days. Then of course the Beatles came along and gave us more classic and awesome guitar riffs like “Hard Days Nights,” “I Feel Fine,” “Blackbird,” “Come Together,” and so many more. Something about these genius guitar riffs just make you wanna play guitar.

The Doobie Brothers and others from the 1970’s made us run for the guitar and try to figure out greats like “Listen To The Music,” “Long Train Runnin,” and “China Grove.” Or it was Eric Clapton who got us playing songs like “Lay Down Sally” and “Layla.” The music of the 60’s and 70’s was a guitar feast. Whether it was a rhythm riff or a lead line, songs were guitar driven and memorable. Country greats like Merle Haggard gave us “Momma Tried” and “Working Man Blues.” Man, if you didn’t have a Telecaster, you went and bought one. Even The Rolling Stones had you jammin’ along to “Satisfaction” and “Jumpin’ Jack Flash.” They didn’t have to be super flashy guitar riffs, just simple cool licks that made you want to play.

We may not remember them all but you can’t forget “Alright Now” by Free or “Cat Scratch Fever” by Ted Nugent. They are as much about tone as they are the riff itself. You’ll need a Marshall Blues Breaker or a Fender Deluxe to find a sound even close and, instead of a Tele, you’ll need a Les Paul or something with humbuckers. Aerosmith came along with “Walk This Way,” Led Zeppelin with “Rock and Roll,” and let’s not leave out Lynyrd Skynyrd and a whole list of essentials like “Sweet Home Alabama,” “I Know A Little,” “Free Bird,” “Mr. Saturday Night Special,” and many more. In those days, it wasn’t just one song, it was a whole album. Ten magical songs that seemed to weave together.

Any great guitarist today will get these tunes under their belt. One, for the influence, but it’s also for the sheer point of playing something recognizable. So much of today’s music has no real hook or signature. It’s more about a beat or an effect. Real guitar music had meat. You had to manhandle a Les Paul with a fat neck that weighed 10 pounds.

...or hell depending on who you ask. After disco started to fade, early ‘80s bands like Journey, Toto and others came on the scene with more complex guitar parts and solos. Songs like Journey’s “Don’t Stop Believing,” “Faithfully,” and “Separate Ways” are great for guitar riffs. Toto’s Steve Lukather played dozens of signature riffs on tons of radio hits from the LA Studio scene, but his Toto classics like “Rosanna,” “I’ll Be Over You,” and others left us all in awe at Luke’s ability to milk a guitar for all it’s worth in one solo. These ‘80s guys were the apex of guitar greatness. The big hair bands added a lot too. Guns and Roses’ “Sweet Child O’ Mine,” Metallica’s “Enter Sandman,” and even Bon Jovi’s “Wanted Dead or Alive” had every music store lit up with rockstar wannabes trying to figure out these cool guitar riffs.

There were bands and legends and then there were innovators who completely changed the guitar landscape. Eddie Van Halen of the band Van Halen came along with his two-handed tapping technique and completely changed the game. Listen to “Eruption,” “Jump,” “Panama,” or “Hot For Teacher.” You’ll get the sense that Eddie was on a whole different level. Everybody was trying to figure out how to do the tapping thing and do it well. These days you’d get shot for doing that, but it definitely made you want to play. Steve Vai, Joe Satriani, Eric Johnson, and others also came out with instrumental CDs we all spent hours trying to figure out. Listening to these guys made you want to make your own music.

From the ‘90s and on, we’ve been struggling to keep an identity when it comes to signature guitar. Nirvana’s Kurt Cobain and the grunge sound of “Smells Like Teen Spirit,” may not have been your cup of tea, but it’ll go down as being innovative and fresh. It seemed like guitar had nowhere else to go and these guys and others found a way to keep guitar front and center. Most of the pop music scene seems to use guitar as a prop and there’s very little riffage you can sink your fingers into these days. Still, once in a while a tune will stand out. Miley Cyrus’ “Party in the USA” had a cool guitar riff. Some of Taylor Swift’s tunes have hip acoustic and electric riffs. Memorable? Probably not, but at least we’re in the ballpark. Today you really need to drift over into new country to hear some really cool guitar work.

New country artists like Jason Aldean, Brantley Gilbert, Little Big Town, Keith Urban, Chris Stapleton and others are the new incarnation of old rock. Some of it’s Southern rock, but some of it is just pure classic rock. Guitars are blazing. Will they stand the test of time? Will we still be trying to figure out their riffs 25 years from now? We’ll see. The guitar riffs that make you wanna play may be mostly in the classic guitar days of the late 20th century. Maybe it’s up to you to create the new cool guitar riffs that the youth will be trying to figure out for the next 25 years. Make your own music and find out.

If you want to get started on your own guitar riffs, you’re going to need some guitar lessons. There are a number of reasons why you should consider online guitar lessons. When you sign up for one of the many affordable plans at Pro Lessons, you’ll be learning from some of the best guitarists out there. Find out how you can be our next student by clicking below.