Guitar Solos That You Should Definitely Learn 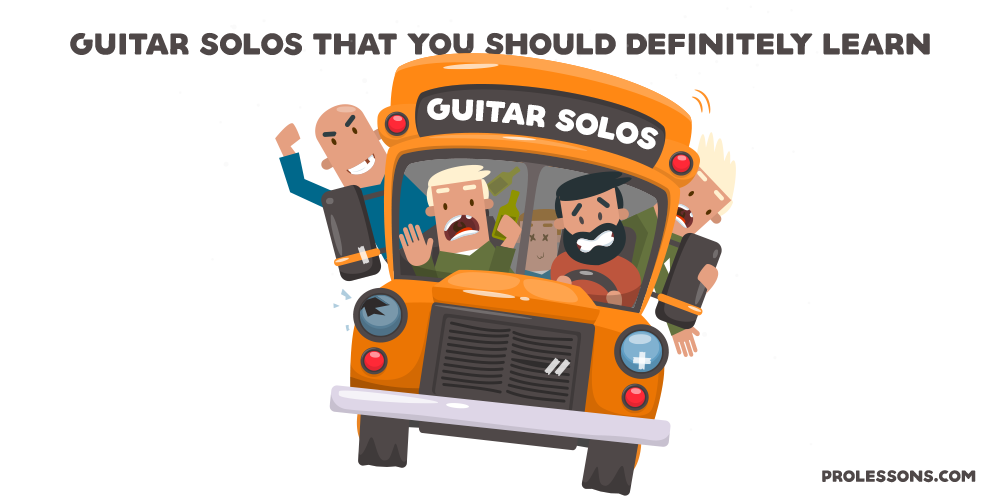 Assuming you are an accomplished guitarist or at least a daily student, there are things every serious guitarist should know. You don’t have to be a walking library of cover tunes but it doesn’t hurt. Knowing guitar solos lick for lick is a neat skill, but even more than the solos, knowing the signature riffs and changes to cover songs is a gig winner. Unless you’re playing with a tribute band, most cover bands don’t care if you make the solo a little more “you” than the recording. Either way, learn the original solo and then make it yours. That’s how we all learn from the greats. When you learn a song or solo riff for riff, it introduces you to new things and new ways of thinking.

Rock Around The Clock - Bill Haley and the Comets

Bill Haley and the Comets’ swinging hit from the 50’s was a time when guitar was young and not so precise. It’s like they all were newbies just figuring things out. Guitar solos were a bit primitive but they were reckless in a good way. The solo for “Rock Around The Clock” starts off fairly pentatonic, but then there are these slides from the top of the fret board down to the first few frets at the end that are just hard to mimic. When you figure it out, you’ll really have something on your hands. Sliding is another technique that is hard to control, especially when you slide a long distance. It takes dozens of reps to get the muscle memory right. There’s also some swift picking in the solo that’ll require some down and up motion with your pick. You can see how knowing classic guitar solos will introduce you to things other guitarists have stumbled upon. This will happen in almost every guitar solo you learn.

This Eric Clapton classic has been played by every cover band that ever was. A sweet slow dance, you get to lay back and start slow. The signature riff also follows the solo concept. Eric bends the strings slowly and accurately and seats the note in just the right place each time it comes around. Bending notes is an acquired skill. Some people bend notes and it sounds like a cat sick with the stomach virus. There’s an art to doing it smoothly. Try using two or even three fingers. Put your third finger on the note you’re bending and put the other two fingers on the same string behind the third finger. Push up with all three fingers and don’t forget to seat the back of the knuckle behind your first finger against the guitar neck and use your hand as a fulcrum. Push the note to just the right pitch and stay in time. Listen to the record until you get it just right.

This song doesn’t have a guitar solo, but the signature intro riff and love licks are to die for and there’s this one guitar lick that responds to the words “the guitar’s comin through to sooth me.” It’s pretty important to get that one just right. The intro riff is very chordal and in the key of B, it isn’t easy to make it sound right. This guitar classic requires the use of CAGED theory. The intro moves from an “A” shaped B to a “G” shaped B and then moves through other chords, but the point here is you need to know CAGED theory. It will change the way you see the guitar neck and the way you play. All the little love licks are used in other classic songs too, so learn them well. They seem to answer almost every vocal phrase in the song. Go for it, you’ll thank us later.

One of the best guitar songs of all time would have to be “Hotel California.” The solo work in this classic is as mystical as the lyrics themselves. Walsh and company layer harmonies over an extended solo section that just never gets old. Recognizable guitar solos come to mind, no matter where you are in the mall or on the road, if this tune comes on, the second you hear the guitars, you know it’s “Hotel California.” Maybe that’s the lesson in this solo work. When you create a guitar solo, shoot for something people will remember. This solo is melodic and whimsical. If you’re gonna do it perfectly, it’ll take two guitarists to layer the harmony notes, but you should still learn this one lick for lick.

Slash with his Gibson Les Paul wins the award for keeping it classic. What might have been otherwise cheesy has become a classic. When you revisit the solo in this tune, you quickly discover just how perfectly Slash hit the bullseye. At a time when rock guitar was fading and needed a little life, these guys kept the torch burning. The tone and technique in Slash’s guitar solos are a tip of the hat to many classic solos like Jimmy Page or Keith Richards. Bends and pulls and even a wah wah pedal moment. There’s even some Hendrix moments. The sweet thing is it’s slow enough that the average or up-and-coming guitarist can achieve it. You should take the time to learn this one start to finish.

If you’re going for something more difficult and you’re ready for two hand tapping and other crazy techniques on guitar, go ahead and try this one out. There’s plenty of tablature available for it and with a lot of persistence, you’ll be able to work through it. The secret is to do everything slow and methodical at first and, as you gain confidence and precision, speed up and eventually you’ll be blowing everyone’s mind. Doing a solo like this note for note is impressive even if you never perform it in front of an audience. Some of Eddie’s cool tricks will rub off on you and you’ll add some of this junk in your own music or other guitar solos. That’s how it works.

Guitar solos need to be as meaningful as the song itself. Don’t just stutter and mumble through a solo, say something. Speak! Make each line or note you play connect to the next phrase and be interesting. That’s what makes for a powerful piece of music.

Before you can master all of the great guitar solos out there, though, you need to understand how to play a song all the way through. That’s where guitar lessons can really help. Learn from the experienced instructors at Pro Lessons and you can be making music of your own in no time. Find out more about our affordable rates by clicking below.