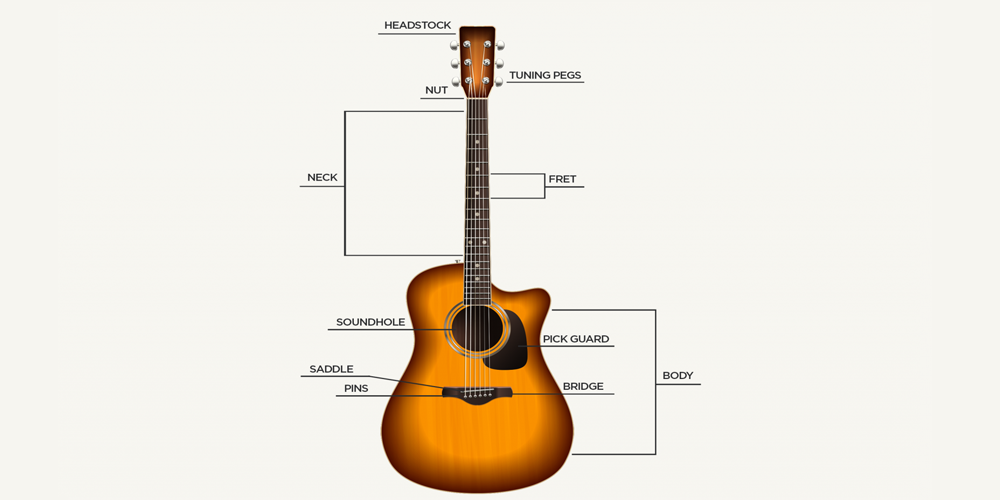 An acoustic guitar is a guitar that produces sound acoustically by transmitting the vibration of the strings to the air—as opposed to relying on electronic amplification. The sound waves from the strings of an acoustic guitar resonate through the guitar's body, creating sound. This typically involves the use of a sound board and a sound box to strengthen the vibrations of the strings. The main source of sound in an acoustic guitar is the string, which is plucked or strummed with the finger or with a plectrum. The string vibrates at a necessary frequency and also create many harmonics at various different frequencies. The frequencies produced can depend on string length, mass, and tension. The string causes the soundboard and sound box to vibrate, and as these have their own resonances at certain frequencies, they amplify some string harmonics more strongly than others, hence affecting the timbre produced by the instrument. via wikipedia

Classical gut-string guitars had little projection, and so were unable to displace banjos until innovations increased their volume.

Two important innovations were introduced by the American firm, Martin Guitars. First, Martin introduced steel strings. Second, Martin increased the area of the guitar top; the popularity of Martin's larger "dreadnought" body size amongst acoustic performers is related to the greater sound volume produced. These innovations allowed guitars to compete with and often displace the banjos that had previously dominated jazz bands. The steel-strings increased tension on the neck; for stability, Martin reinforced the neck with a steel truss rod, which became standard in later steel-string guitars.