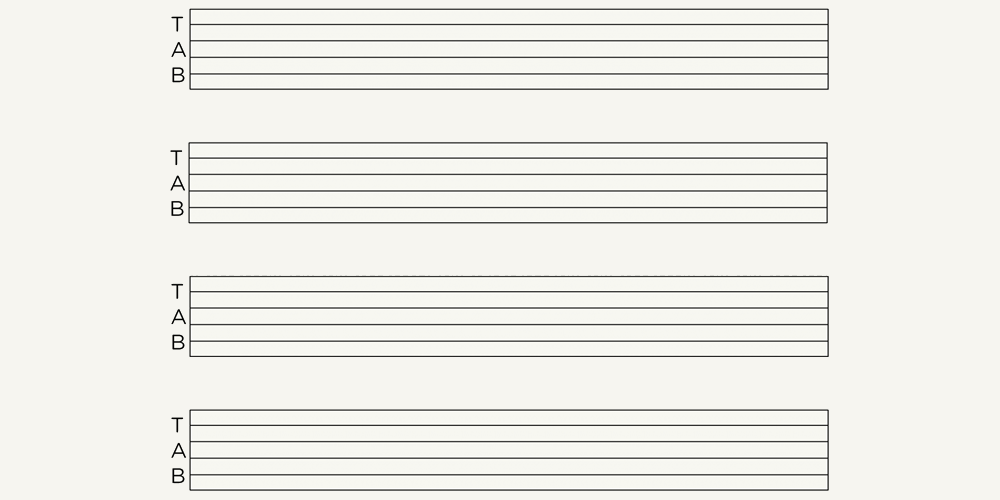 Creating your own Guitar TABS for guitar.

Fretboard tablature is a closer visual representation of the instrument's fretboard compared to standard notation. It does not require as much training for players to be able to read tablature; therefore, in terms of pitch definition on the instrument, it is often easier and quicker to interpret.

Fretboard tablature (unlike organ tablature) removes the requirement for the player to determine the fretboard position within which the notated music is to be executed. Notes on the guitar can be played in different fret hand positions and upon several different strings; for example the note C4 could be played on the third string at the fifth fret or on the fourth string at the tenth fret. In the case of fretted instruments such complexity makes the relationship between staff notation and playing technique less direct than in the case of the piano and many other instruments. Information via: Wikipedia

We have created blank Guitar TABS to help encourage you as a player as you try your hand at tabbing out music. This will not only stretch you as a player but it will also help you in your knowledge of music theory. Think about working out, the more you push yourself the stronger and further you will go. Learning the guitar is very much the same way. It may feel uncomfortable at first but as you push your limits you will see growth and opportunites will arise as a result. Download these blank TABS and start this great exercise.